French president Sarkozy met with Italian PM Prodi on Monday and discussed a proposal to create a Mediterranean dialogue. They have many different views including Turkey. 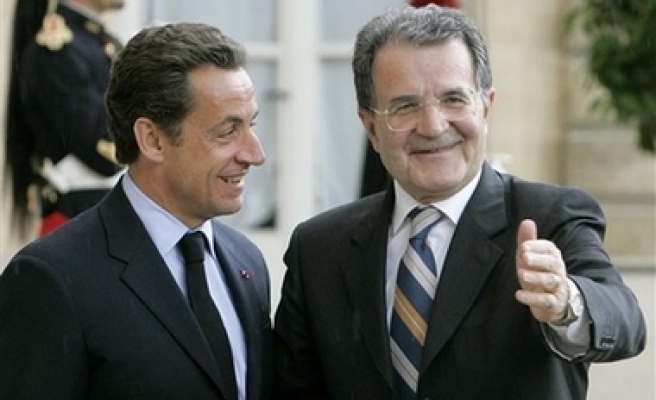 Speaking at a press conference after their 90-minute talks, Prodi said there was a "constructive and friendly" dialogue between the two leaders who have not always seen eye-to-eye on European and other questions.

"There is a common will to reinforce European institutions," he said, noting that France and Italy have "common objectives for the European Summit" that will be held in the second week of June.

On Turkeys bid to join the EU, Prodi and Sarkozy are on different planes, with the French leader adamantly opposed to Turkeys entry into the Union.

"Europe must have borders," he repeated Monday, "even if Turkey is a great country." He said his philosophy applied equally to Turkey and to Ukraine, for example.
While both men said Turkey would have a central role in the future Mediterranean structure they want to create, they denied this was a strategy to get out of the dilemma over Turkish membership of the European Union.

Prodi and Sarkozy have differed on the new European Constitution, with Italy favoring a strong document that would reinforce the powers of the centralized EU institutions, including a new EU president, and would also allow for a majority voting system that would remove veto powers from larger countries or blocs.

France, which rejected the new constitution in 2005, is now in an isolated if not weaker position and Sarkozy has thus proposed a "simplified" if not watered-down treaty that would not need a referendum to be adopted, but would just need parliamentary approval.

Prodi told journalists that what is sought is a European Union "that is not paralyzed by vetoes," and it seems Sarkozy is also in favor of this.

Both leaders also discussed a proposal to create a Mediterranean dialogue and a structure or "operational relationship," to Union, to promote economic development between the EU members and other countries in the Mediterranean area.

France will present this idea in a more formal way towards the end of the year, probably in December, Sarkozy said. Around seven countries are expected to be invited, but he said other countries should not feel they are being excluded.

The French leader added that he wanted "to reinforce the convergence of views" between Italy and France with a view of "getting out of the blockage" in Europe at the present time.

He added that France agrees with the majority voting proposal "so that those who want to move forward are not held back." He indicated that he and Prodi had also discussed the preparations for the Group of Eight (G8) Summit in Germany in July, the most important gathering of the worlds economic and political powerhouses in the year.
Briefly touching on the crisis in Lebanon, Prodi, for his part, indicated that both leaders fully agreed on the need to support the Lebanese authorities in the face of the threat.

"We share the same objectives and concern" about Lebanon, he said, noting that both countries had troops with the UNIFIL force and had cooperated very well with transition of authority within that force.

"We are involved" in Lebanon and "we vigorously support the government of (Lebanese Prime Minister Fuad) Al-Siniora," he stated.

He said that Lebanon was "a point of equilibrium" and "one of the fundamental problems in the Middle East." On Afghanistan, Prodi said both men had the same position but he would not elaborate greatly on an Italian call for an international conference on the problems in that country.

Sarkozy said during his election campaign that he did not foresee French forces staying in Afghanistan for the long term.