FNTR road transport says bankruptcies among transport operators have risen 25 percent in the first three months of the year from a year earlier, with 500 firms going out of business. 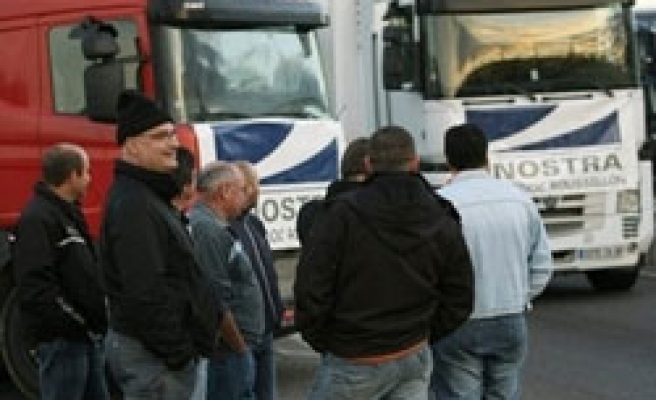 French truckers began blocking roads across France on Monday as they continued a protest against high fuel prices and urged the government to help the industry.

The nationwide day of action announced by the main haulage associations included roadblocks and so-called "snail" operations by convoys of slow-moving trucks and is expected to disrupt traffic severely, especially on highways.

But in a gesture intended to minimise delays for nearly half a million students sitting their baccalaureat examinations on Monday, the protest action was delayed until 9:00 a.m. (0700 GMT) and is expected to end at 4:00 p.m.

"It's not about punishing transport users, it's about sending a warning to the government," said Philippe Fournier, an official of Unostra, an association that mainly represents small haulage firms. "It has to accept its responsibilities."

Traffic was already building up around Paris and on roads leading to major towns including Lyon and Toulouse by mid-morning, the road traffic authority said.

Coming a day before a separate day of action by unions against plans to reform working hours and pension laws, the fuel protests add to a climate of discontent as France prepares to assume the presidency of the European Union next month.

Monday's operation was the latest in a series of protests by groups ranging from truckers to fishermen aimed at pressuring the government to provide help in coping with the soaring cost of fuel, notably through tax relief.

Similar protests by groups particularly vulnerable to rising fuel prices have been held across Europe in recent weeks, lifting the issue of oil prices to the top of the policy agenda.

In addition to fuel costs which have been multiplied by five over the past five years, the FNTR road transport association says highway tolls have gone up 25 percent in the past three years and also complains of rising payroll costs.

It says bankruptcies among transport operators have risen 25 percent in the first three months of the year from a year earlier, with 500 firms going out of business.