President Nicolas Sarkozy looked set to win a powerful majority as the French voted in Sunday's runoff elections for parliament. 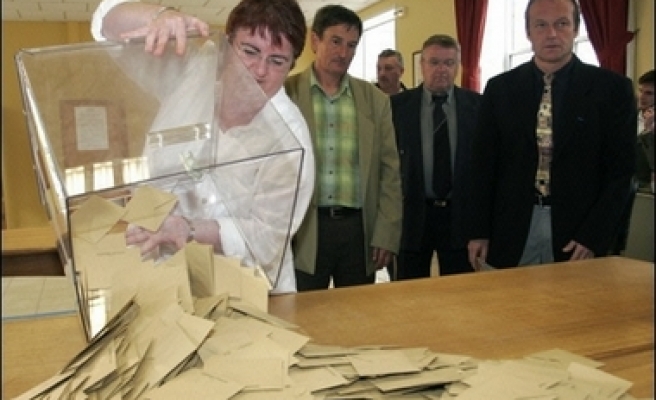 President Nicolas Sarkozy looked set to win a powerful majority as the French voted in Sunday's runoff elections for parliament.

Final polls Friday suggested the president's conservative party, the Union for a Popular Movement, or UMP, and its allies would take more than 400 seats in the 577-seat National Assembly.

"The game isn't over yet," Sarkozy said last week, confident but careful not to appear cocky ahead of an election that could hand him a majority bigger than any in modern-day France.

The participation rate could help determine the size of the presidential majority, with a high turnout helping the Socialists, in crisis since the May presidential election. The first-round parliamentary vote a week ago saw a record low voter turnout of barely 60 percent.

The Socialists have played on fears that a huge conservative majority may silence the voice of democracy, turning the parliament into Sarkozy's rubber stamp, and see uncomfortable reforms hoisted on the populace.

Sarkozy's government has already scheduled an extraordinary session of the new parliament for June 26 to begin passing some of his planned reforms, including loosening the 35-hour work week, guaranteeing minimum service during public transport strikes and getting tough on repeat lawbreakers and illegal immigration.

In the first round of parliamentary voting last Sunday, Sarkozy's UMP and its allies won 45.5 percent of the vote, while the Socialists and other leftist parties took 35.4 percent.

The first round saw 110 seats filled outright — all but one by UMP members — in constituencies where a single candidate took more than 50 percent of the vote. The 467 remaining seats went to the runoff.

Socialist candidates hung signs in their offices: "June 17, Vote against the VAT at 24.6 percent."

"He is waiting for a massive majority in the National Assembly to make this increase," failed presidential candidate Segolene Royal said on the final day of campaigning Friday.

The issue of a potential sales tax hike, meant to help pay for social security, left Sarkozy disarmed for the first time since he took office May 16. On Thursday, he publicly refused any sales tax increase "that would reduce the buying power of the French."

One casualty of Sunday's vote is centrist Francois Bayrou — who could end up being the sole lawmaker in his newly formed party, Democrat Movement, or Modem. The centrist formation he previously headed had 29 seats in parliament but most deserted to back Sarkozy. All but four Modem candidates were knocked out in the first-round vote.

The Communist Party is hoping to win 20 seats — the number required to form a parliamentary group with special prerogatives.

The voting Sunday holds a special challenge for four government ministers. Prime Minister Francois Fillon encouraged ministers to run for parliament to bolster the government's legitimacy — and said they would lose their Cabinet posts if they don't win.

Of the 11 who entered, seven won outright. Three of the four remaining minister-candidates were expected to win easily Sunday. However, there were doubts whether Alain Juppe, ecology minister and the government's No. 2, would prevail over Socialist Michele Delaunay in their race in the Gironde district where Bordeaux is located. Last Mod: 17 Haziran 2007, 12:15
Add Comment