French riot police fired tear gas and water cannon at youths lobbing bottles and stones in central Paris to protest the election of Nicolas Sarkozy as president on Sunday. 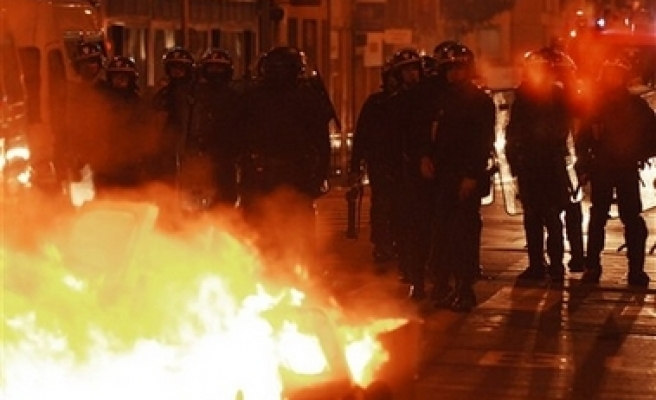 French riot police fired tear gas and water cannon at youths lobbing bottles and stones in central Paris to protest the election of Nicolas Sarkozy as president on Sunday.

A number of similar incidents involving thousands of anti-Sarkozy protesters were reported in the suburbs.

Police said at least four police officers and one civilian were injured in the Place de la Bastille confrontation in central Paris, but did not say whether arrests were made.

Conservative Sarkozy got 53.1 per cent of the vote in the second round run-off with Segolene Royal to win the presidency.

There were anti-Sarkozy demonstrations in cities across France on Sunday night, with minor scuffles between police and protestors reported in Lille in the north, Toulouse in the southwest, Lyon in the southeast and Nancy and Metz in the east.

The Paris suburbs, where the riots began before quickly spreading across France, were mostly quiet by Sunday night after Sarkozy's victory.

But police reported that youths had burned several dozen vehicles.

In the Mediterranean port of Marseille, police dispersed around 300 protestors with tear gas.

The crowd, hiding behind a barricade of burning garbage cans, taunted police for several hours before dispersing.

The majority of Royal supporters, some of whom staged sit-ins in front of police lines, continued a peaceful rally as the riots went on in one part of Bastille square.

A small crowd of protestors, brandishing black and red anarchist flags, set fire to an effigy of Sarkozy in the square before tearing it limb from limb and then stomping on it.