Clashes between Palestinian groups in the Gaza Strip have continued, with Israel launching air strikes. 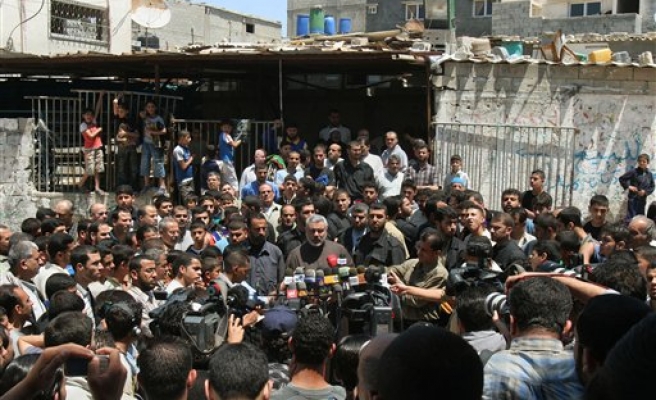 A total of eight people are reported dead in Israeli air raids, with five killed in what the Israeli military said was a Hamas headquarters building.

Earlier, two Hamas men and a passer-by were reported killed when a van was hit close to a Hamas post in northern Gaza.

The Gaza bureau chief of Abu Dhabi TV was released several hours after being abducted, the Arabic channel said.

Colleagues of Abd al-Salam Abu Ashkar, a close associate of senior Fatah figure Mohammed Dahlan, said he was seized at gunpoint as he approached a roadblock in Gaza City.

They said the journalist was taken by armed gunmen belonging to the Hamas Executive Force.

But a spokesman for the paramilitary group denied any involvement.

"We oppose the abduction of any journalist," Islam Shahwan said.

Several journalists have been kidnapped in Gaza in recent years, including the BBC correspondent, Alan Johnston, who disappeared more than nine weeks ago.

Mr Abu Askhar's abduction came amid a series of Israeli strikes in the Gaza Strip - totalling 13 since Wednesday - in response to repeated rocket attacks on southern Israel.

Earlier, a Hamas compound in central Gaza was hit, killing one person and injuring 20.

According to the Israeli authorities, close to 100 rockets have been launched from Gaza in recent days, including at least 10 fired at the southern Israeli town of Sderot on Friday.

Correspondents say the rocket attacks on Israel appear to be an attempt to draw it into an internal Palestinian conflict.

"The Palestinian people need to unite in the face of the Israeli aggression, and avoid any factional fighting because that certainly does not serve our people or our unity," he said after attending Friday prayers.

Instead, I say all security organisations should follow the instructions issued by the political leadership."

Despite Mr Haniya's call, fresh clashes were reported between armed supporters of the two factions.

One person was wounded when fighters loyal to Palestinian leader Mahmoud Abbas' Fatah movement fired upon Hamas members near the Islamic University of Gaza, a stronghold of the group.

Earlier, the university's president, Kamalain Shaath, said his office had been hit by rocket-propelled grenades.

Mr Shaath called for an immediate halt to the clashes.

"Universities must be outside the circle of violence and I appeal to the president and all the wise people on both sides to try and spare the university the agony of this fight," he said.

Numerous ceasefires called to end the infighting during the past week have collapsed, leaving more than 40 people dead.