Chancellor Angela Merkel said Thursday that the Group of Eight has agreed on a plan calling for "substantial cuts" to greenhouse gas emissions. 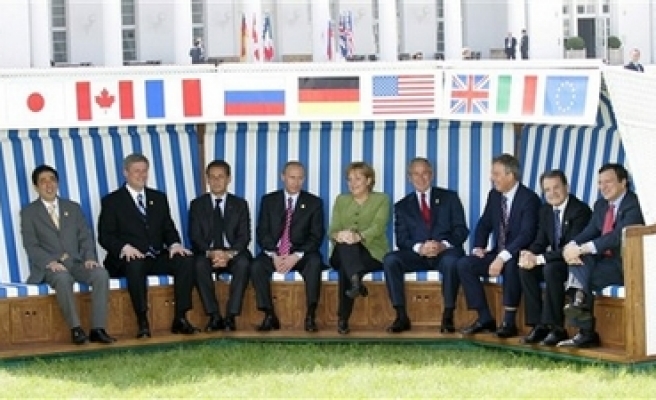 Chancellor Angela Merkel said Thursday that the Group of Eight has agreed on a plan calling for "substantial cuts" to greenhouse gas emissions.

The goal is to agree to cut greenhouse gas emissions in half by 2050, Merkel said, hailing the decision as a "huge success." She said it came after many rounds of talks and negotiations on climate change.

Earlier Thursday, British Prime Minister Tony Blair held out hope that world leaders would reach such an agreement despite differences between the U.S. and Europe over whether such cuts should be binding.

Blair, who leaves office June 27, was saying farewell to President Bush and other leaders at the Group of Eight summit in this city on the Baltic Sea in northern Germany.

"I think that it is possible that we'll leave the summit with a commitment on the part of everyone to a substantial reduction of greenhouse gases by 2050 as a global target that is of the order of the type of figures the Europeans are talking about," Blair said.

But agreement on the goal of a deep, fixed reduction of 50 percent was unlikely, he said.

"What is important is that that there should be such a target and that is the sort of ballpark we're talking about," he said.

Merkel, the summit host, sought an agreement on binding reductions. Bush instead has proposed having the 15 top polluters meet and set a long-term goal, but decide themselves how much to do toward it.

Blair and Bush later joined six other counterparts for the first working session of the G-8, which besides global warming is tackling edgy relations with Russia and Moscow's opposition to Western efforts to secure independence for Kosovo province, the crisis in Darfur, aid to Africa, the Middle East and trade talks.

North Korea is likely to be another topic of discussion.

Merkel chaired the first working G-8 session, with Blair to her left and Bush next to him. Also at the table were Russia's Vladimir Putin, Italy's Romano Prodi, Canada's Stephen Harper, France's Nicolas Sarkozy, Japan's Shinzo Abe and Jose Manuel Barroso of the
European Commission.

Bush and Putin were to meet privately later Thursday, after days of Cold War-style sparring over U.S. plans to base a missile defense shield in Russia's back yard.

The assembled leaders also met with youth representatives holding a summit of their own, known as the J-8.

Anti-poverty groups, meanwhile, hope the leaders will recommit to promises made during their summit two years ago in Gleneagles, Scotland, to increase international aid to poorer countries.

In 2005, the G-8 agreed to increase the amount of aid by $50 billion a year through 2010, with half going to Africa. But since then, the pledge has fallen short and missed the target by $30 billion, anti-poverty groups say.

This year's Group of Eight gathering is being held under tight security, with Heiligendamm sealed off by a seven-mile, razor wire-topped fence. Thousands of police have been deployed across the northern German region.

Protests continued Thursday on the second day of the summit, as demonstrators continued to block roads leading to Heiligendamm and police again resorted to firing water cannons to scatter them.