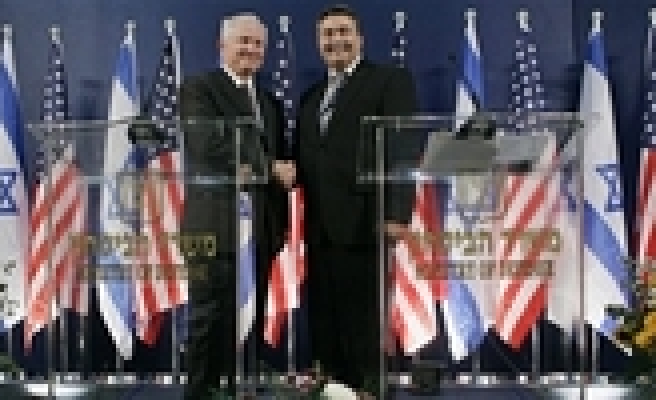 Iran was high on the agenda of Gates' 24-hour stop in Israel. Olmert's spokeswoman, Miri Eisin, said the issue came up again during the one-hour meeting Thursday, along with talks about Syria, Lebanon and the Palestinians.
"It was a fine positive conversation. They talked about regional aspects, strengthening defense cooperation with the United States," she said. She declined to elaborate.
But earlier, Gates said diplomatic efforts to resolve the standoff with Iran are working and should get a chance to succeed. At a news conference Wednesday, Gates said many nations are "united in telling Iran what it needs to do with respect to its nuclear program."
His words appeared aimed at diffusing suggestions in Israel and the U.S. that the Pentagon is moving toward a strike against Iran.
Both the U.S. and Israel accuse Iran of trying to develop nuclear weapons, which Tehran denies.
The Israeli concerns have been heightened by Iranian President Mahmoud Ahmadinejad's repeated calls for Israel's destruction. Olmert has never ruled out taking military action, but he has repeatedly said he would prefer a diplomatic solution.
The United States and its allies have led efforts to pass two U.N. Security Council resolutions punishing Iran for refusing to suspend uranium enrichment. That process can be used to develop nuclear weapons.
"We agreed it was important to deal with the Iranian nuclear problem through diplomacy, which appears to be working," Gates said at Wednesday's news conference with Defense Minister Amir Peretz.
"These things don't work overnight, but it seems to me clearly the preferable course to keep our focus on the diplomatic initiatives, and particularly because of the united front of the international community at this point," Gates said.
At the same time, Gates confirmed the U.S. commitment to Israel, noting that he is the first Pentagon chief to visit the country in eight years.
"I think the fact that I have come here in the end of my fourth month as secretary illustrates the importance that I attach to our relationship with Israel," he said.
Before their meeting Thursday, Olmert said he was "very proud and grateful" for the visit. "It gives us an opportunity to speak to the most powerful man in the defense establishment in the United States of America, which is extremely important to us."
Gates also visited Yad Vashem, Israel's national Holocaust memorial, before departing. At the memorial, he visited the Hall of Remembrance, rekindled the eternal flame and laid a wreath. He also stopped at the children's memorial, in which the names of the 1.5 million children killed by the Nazis are read.
Gates said he felt it was important "to pay my respects" to the 6 million Jews who died in the Nazi genocide.
Gates is on his third trip to the region as defense secretary.