Militants stormed the Gaza house of a top security chief on Wednesday, May 16, and killed five of his bodyguards in a new spree of feuding fighting despite a renewed ceasefire to end the worst infighting in months. 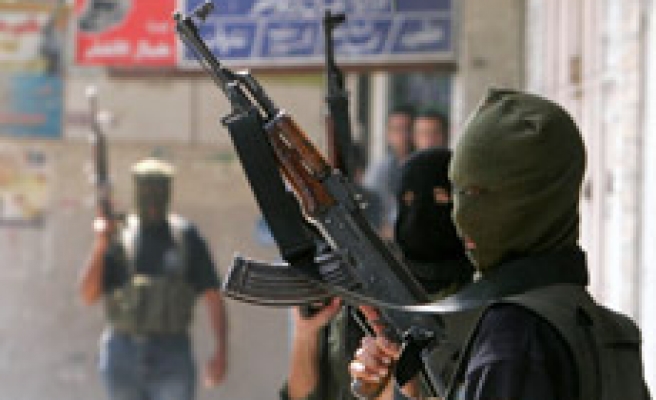 Militants stormed the Gaza house of a top security chief on Wednesday, May 16, and killed five of his bodyguards in a new spree of feuding fighting despite a renewed ceasefire to end the worst infighting in months.

A Fatah official blamed the attack on the home of Rashid Abu Shbak, also a senior Fatah official, on rival Hamas, Reuters reported.

He said the attackers also set fire to part of the house and briefly detained Shbak's wife and daughter before fleeing the scene.

But Hamas, blaming Fatah, said the attack was triggered when shots were fired from Abu Shbak's house at a passing Hamas patrol.

Abu Shbak, who is one of the top security officials in the Palestinian Authority, was apparently not at home at the time of the attack.

Gunmen also pounded the main headquarters of the Fatah-dominated Preventive Security service with mortar bombs, sparking another gun battle in the area.

Wednesday's fatalities brought to 29 the number of people killed since Friday in the worst factional fighting in Gaza.

On Tuesday, sixteen people were killed.

Tension between the two rival groups has been running high since Hamas was voted to power last year.

The groups trade blame for provoking the violence, which has exacerbated the woes of Palestinians gripped by the worst economic crisis in their recent history because of a Western aid freeze.

The killings came after the two rival groups agreed a new truce that was supposed to have taken effect at midnight Tuesday.

"It was agreed that ceasefire will begin at 12 midnight (2100 GMT)," Prime Minister Ismail Haniyeh said after meeting with faction leaders in the presence of Egyptian mediators.

Fatah and Hamas also confirmed their agreement, which was supposed to include the lifting of barricades and the release of hostages from both sides.

No sooner had the announcement been made than one of the Egyptian mediators was injured when gunmen opened fire on a convoy of Fatah and Hamas leaders after they failed to stop at a barricade.

Palestinian leaders have made repeated promises to quell the violence.

But the security services have proved incapable of imposing law and order and kidnappings, clan clashes and factional feuding are rife.

The infighting has dealt a major blow to the national unity government set up by Fatah and Hamas.

While marking the 59 anniversary of the usurpation of their homeland by Jewish gangs, many Palestinians said the factional fighting was a second Nakba. Last Mod: 16 Mayıs 2007, 14:29
Add Comment