The demonstration, during which journalists laid down their cameras, came on a day when U.N. Secretary-General Ban Ki-moon will unveil a memorial dedicated to journalists killed while reporting on wars around the world. 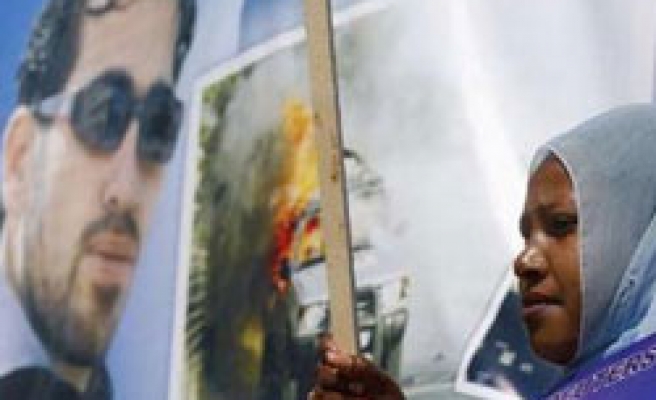 Journalists in the Gaza Strip held a symbolic work stoppage on Monday as part of a protest to demand that Israel explain why its troops killed a Reuters cameraman in the Palestinian enclave two months ago to the day.

The demonstration, during which journalists laid down their cameras, came on a day when U.N. Secretary-General Ban Ki-moon will unveil a memorial dedicated to journalists killed while reporting on wars around the world.

Reuters Middle East Managing Editor Mark Thompson said: "We are deeply disappointed that the Israeli army has failed to provide an account of the circumstances in which Fadel Shana was killed by a tank shell on April 16, nor any evidence to support its claim that they could not identify him as a journalist.

"Fadel had taken all reasonable precautions while filming that day and the refusal of the Israeli army to work with the media on safety issues since his death has forced us and others to curtail reporting in Gaza."

Eight other civilians were killed along with Shana.

A spokesman for Prime Minister Ehud Olmert denied Israel, whose army has warned journalists that they work in Gaza at their own risk, was seeking to discourage coverage there.

"We urge journalists to use common sense and to look after themselves. But the idea that journalists should not go to Gaza is not the position of the government," spokesman Mark Regev said during a tour for journalists of Israeli towns hit by rockets fired by Islamist militants in the Gaza Strip.

"We have expressed regret and the army is conducting an investigation. It's a tragedy," Regev said. "There was no identification that he was a journalist. Had it been clear he was a journalist, the shell would not have been fired."

Journalists for Palestinian and foreign media operating in Gaza agreed not to publish images on Monday of any Israeli military operations in the enclave. About 50 journalists also attended a brief demonstration in the city of Gaza.

Shana, 24, and a colleague who was wounded in the wrist, had been filming from a tripod in full view of two tanks for several minutes when one of the tanks fired a shell that exploded above them, showering them with metal darts known as flechettes.

Both wore body armour that carried "Press" markings, as did the car which they had been driving in the area for about half an hour. They were about 1.5 km (a mile) from the tanks. Shana's camera captured the fatal shell being fired.

Reuters, the London-based news agency, commissioned an independent report into the incident which found there was no fighting or militant activity in the immediate area where Shana was working, about 100 metres (yards) from a busy road.