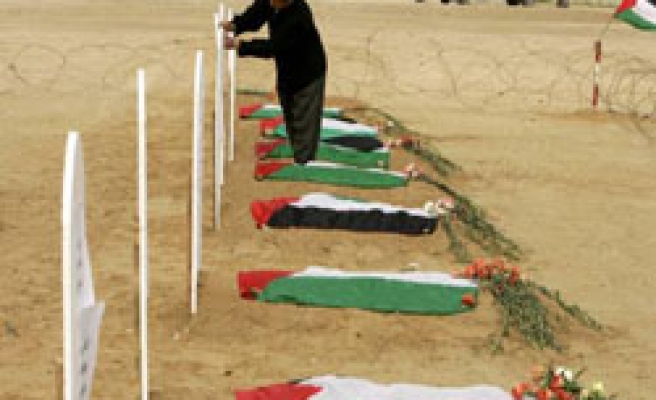 Palestinians inaugurated a symbolic graveyard on Tuesday for factories closed due to the Israeli blockade that they say is killing jobs.

"The Main Gaza Cemetery for Factories" contains some 40 graves covered with the Palestinian flags and flowers.

"The Plastic Tools factory, 190 workers became jobless," the inscription on one headstone reads. "The Print House, 150 workers lost their source of living," reads another.

The cemetery was established by the Popular Anti-Siege Committee, a group campaigning against the border restrictions that Israel tightened after Hamas's takeover of the Gaza Strip in June.

Jamal al-Khudary, a lawmaker and chairman of the committee, said 3,900 factories in Gaza had closed since the blockade began.

Palestinian and foreign agencies have said at least 90,000 Gazans have lost their jobs since June and that unemployment in the territory, home to 1.5 million people, now tops 70 percent.