People who had two normal genes had only a 0.6 percent risk of developing muscle weakness, known as myopathy, during the first year of taking 80 milligrams daily of the Merck drug Zocor, known generically as simvastatin. 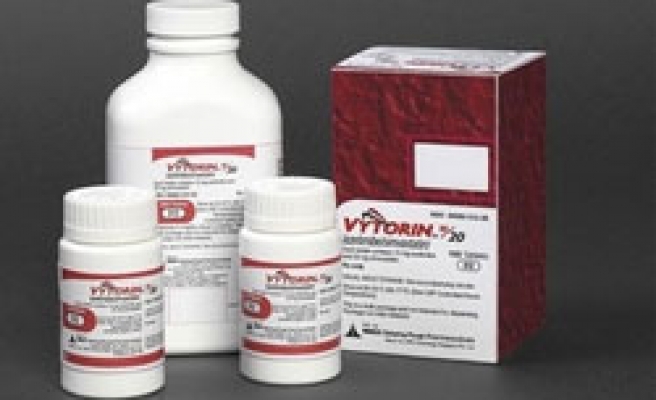 British researchers have located a gene responsible for muscle pain or weakness experienced by some people taking statin drugs to fight "bad" cholesterol, they reported on Wednesday.

The discovery could lead to routine testing to identify patients who should be given a different class of drug, or those who should be kept on a lower dose.

The group, led by Rory Collins of the University of Oxford, used new technology to rapidly scan about 300,000 points on the human genetic code in hopes of finding something different in the 85 who developed the muscle weakness, compared a similar group of 90 people who did not.

They found it on a gene involved in the way the liver regulates statin levels.

People who had two normal genes had only a 0.6 percent risk of developing muscle weakness, known as myopathy, during the first year of taking 80 milligrams daily of the Merck drug Zocor, known generically as simvastatin.

If a patient had one normal and one abnormal gene, which is the case in about 30 percent of the people studied, the risk increased to 3 percent.

With two abnormal genes, found in 2 percent of the population, the likelihood of developing muscle weakness climbed to 18 percent.

That abnormal gene now appears to be responsible for 60 percent of myopathy cases, researchers said.

"It's a very easy, inexpensive test to do," Collins said in a telephone interview. "You're talking less than a dollar once you've got the DNA extracted."

It will be particularly helpful when doctors feel the need to aggressively lower bad cholesterol levels, he said.

"Identifying people who don't have this variant will allow the doctor and patient to be assured that they are much less likely to get myopathy with the high dose or with statins combined with other drugs. I think it can be used to get greater efficacy for particular patients while improving safety," Collins said.

The discovery is less likely to affect patients taking 20 to 40 milligrams of simvastatin daily, or standard doses of other statins, because the incidence of myopathy for them is only about 1 per 10,000 patients per year, the researchers said in research published in the New England Journal of Medicine.

In a Journal editorial accompanying the study, Yusuke Nakamura of the University of Tokyo said the amount of muscle damage seen in the new study was mild and reversible.

Statins can also cause rhabdomyolysis, a much more serious form of muscle damage that can affect the kidney and, in rare instances, lead to death.

Nakamura said further tests are needed to see if a variant of the same gene is also responsible for that condition.

Collins said he believes it is. "It's part of the same problem. This is essentially a gene for rhabdomyolysis and myopathy."