Russian FM Lavrov said: "We can forget about talks on Georgia's territorial integrity because it's impossible to force South Ossetia and Abkhazia to agree that they can be returned into Georgia's fold by force". 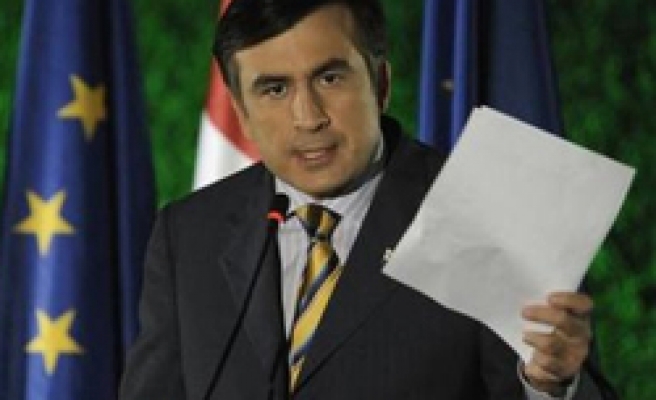 Amid reports of looting by militias, Saakashvili accused Russian troops of "ethnically cleansing" the rebel areas of Abkhazia and South Ossetia. He said Moscow wanted to force Georgia into a humiliation like the one suffered by Czechoslovakia at the hands of the Nazis.

Russia says its actions were fully justified by Georgia's "aggression" in attacking South Ossetia last week and maintains its troops must stay on the ground in Georgia to secure the situation and prevent further conflict.

"I accuse the government of Russia of a deliberate policy of ethnic cleansing", Saakashvili said on Thursday night. "We've received 14,000 reports of brutal attacks, slaughter, rapes and internment of people in violation of the rules of the Geneva Convention and international humanitarian law."

Moscow attacked Georgia with troops, tanks, planes and warships last week after Tbilisi sent a force into South Ossetia to try to take back control over the province, which threw off Georgian control in a war in the 1990s.

Russian troops and armour remained deep inside Georgian territory on Friday, in Moscow's biggest show of force outside its borders since the Soviet Union collapsed in 1991.

The United Nations has expressed alarm at lawlessness in war-torn areas. Witnesses in the area have seen Ossetian militiamen attacking villages and stealing cars.

The United States, a close ally of Georgia, has accused Russia of trying to "punish Georgia for daring to try to integrate with the West" and has threatened serious consequences for years to come unless Moscow steps back.

In a move further souring Russia's ties with Washington, Poland agreed on Thursday to host elements of a U.S. anti- missile system on its land after Washington agreed to base a battery of Patriot missiles there amid the Georgia crisis.

Russia views the plans for an anti-missile system in Eastern Europe as a serious threat to its national security and has promised to respond.

A Moscow Foreign Ministry source on Friday told local agencies that the haste with which Poland and the U.S. agreed the deal "proved" that the system was targeted at Russia.

Diplomatic efforts to end the crisis, which has unnerved oil markets and alarmed the West, continued.

Georgia has yet to formally place its signature on a peace deal brokered this week by France, and Saakashvili appeared uncertain about it.

"We are still in the negotiating process...Russians are trying to justify their invasion and to legalise their presence in Georgia," Saakashvili told CNN. "...I think we should take a closer look at it (the peace agreement)."

German Chancellor Angela Merkel will meet Russian President Dmitry Medvedev in Sochi, near Georgia's border, to urge Russia to embrace diplomacy in its showdown with its small neighbour.

Germany is Russia's biggest trading partner and has historically taken a balanced position towards Moscow, meaning the Kremlin pays close attention to Berlin.

On Friday, Russian tanks and armoured vehicles were again blocking the main entrance to the key Georgian town of Gori, 70 km (45 miles) west of Tbilisi, a Reuters correspondent said.

Russian soldiers relaxing under trees at the Gori checkpoint said looters had been active in the town overnight.

The West is determined to stop the Caucasus sliding further into conflict, not least out of fear for the security of key oil supply routes through the region from the Caspian Sea.

On Thursday, witnesses said Russian tanks had rolled through the Black Sea port of Poti, accompanying trucks with troops to the port area. A large column of Russian troops was seen in the western town of Zugdidi, not far from the second pro-Moscow separatist region of Abkhazia.

French President Nicolas Sarkozy, architect of a three-day old ceasefire, said Saakashvili's signature to a six-point peace deal would "consolidate" the halt to fighting and lead to the withdrawal of Russian troops.

But Russian Foreign Minister Sergei Lavrov said: "We can forget about talks on Georgia's territorial integrity because it's impossible to force South Ossetia and Abkhazia to agree that they can be returned into Georgia's fold by force".

Russia has said the case of Kosovo, a breakaway province of Serbia whose self-proclaimed independence was promptly recognised by major Western powers, creates a legal precedent for Georgia's separatist regions of South Ossetia and Abkhazia.

"Georgia's borders have been reaffirmed by numerous Security Council resolutions. So the question of Abkhazia and South Ossetia will be the subject of international negotiations as they have been at the U.N. Security Council," she said.