Splits within the EU over who is to blame for Russia's conflict with Georgia over the South Ossetia make it impossible to envisage the 27-nation bloc taking steps to punish Russia. 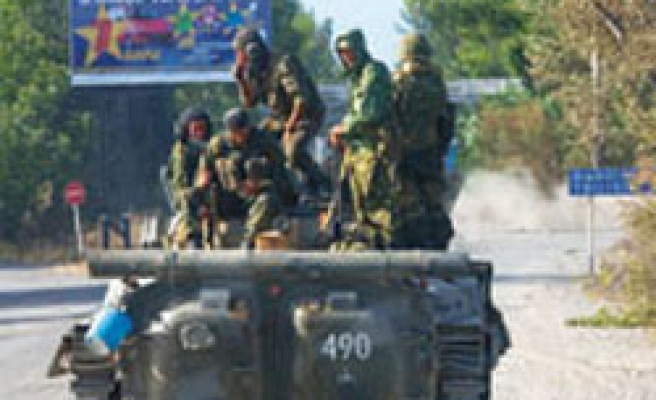 The Georgia crisis has sharpened divisions in Europe about how to deal with Russia and splits within NATO over the wisdom of granting membership to Russian neighbors Georgia and Ukraine.

Splits within the European Union over who is to blame for Russia's conflict with Georgia over the breakaway region of South Ossetia make it virtually impossible to envisage the 27-nation bloc taking steps to punish Russia, analysts said.

In NATO too, the crisis has not fundamentally changed any minds either about how to deal with Russia or whether Georgia and Ukraine should be admitted to the alliance.

"It's going to make it more difficult for the EU to have a Russia policy. The war if anything has divided the European Union's member states," said Tomas Valasek, director of foreign policy at the Centre for European Reform, a British thinktank.

A senior member of the European Commission said the crisis had dashed hopes of a fresh start between Europe and new Russian President Dmitry Medvedev, who took over in May from Vladimir Putin, now prime minister.

"This has ended Medvedev's honeymoon with the West. It's clear that Putin, not Medvedev, is in charge. We had hoped for a new start. Now we have a new start, but of a different kind," he said. It is clear that the Russian military action is bound to have consequences for EU-Russia relations.

He said EU foreign ministers would discuss that in more depth at their informal retreat in Avignon, France, on Sept. 5-6. Among the issues that may be discussed are whether to continue with visa liberalization talks with Russia.

British Foreign Secretary David Miliband said that meeting would decide "whether or not and how" the EU continued negotiations for a new partnership agreement with Moscow spanning areas such as trade, human rights and energy policy. But Valasek said it would be "very difficult" for the EU to agree on any kind of sanction against Russia.

While some EU member states accused Russia of deliberately provoking the war, others believed Russia and Georgia shared the blame and others thought Georgia brought Russia's intervention on itself, he said.

The United States has taken a stronger line toward Russia over the Georgia crisis than Europe has, but Valasek said there was unlikely to be a transatlantic consensus on Russia until a new US administration is settled in next year.

US presidential candidates John McCain and Barack Obama have both warned Russia of severe, long-term consequences from its conflict with Georgia. US Secretary of State Condoleezza Rice has warned Russia's integration into international institutions was at risk.

Some commentators suggest the West could try to hurt Moscow by barring it from the Group of Eight club of big economies. Moscow also wants to join the World Trade Organization and the Organization for Economic Cooperation and Development.

Analysts say Western businesses are very unlikely to yield to any political pressure to avoid operating in Russia, one of the biggest emerging growth markets, buoyed by a tide of oil and gas revenues. David Lubin, an emerging markets analyst, said: "The implications on Russia are almost invisible. It won't make Russia any less attractive."

In NATO, the Georgia conflict has reinforced both sides in the convictions that emerged at a Bucharest summit in April when NATO failed to endorse US proposals to offer a roadmap to full membership to Georgia and Ukraine -- both former Soviet states seeking closer ties with the West.

"I suspect that the divisions in NATO will have deepened. In fact, each side will probably feel justified in taking the position in Bucharest that it did," Valasek said.

NATO said on Tuesday its pledge that Georgia would one day become a member of the US-led military alliance still stood.

Alliance foreign ministers will meet next week to discuss a US call to review relations with Russia. In one camp, the United States, the Baltic states and somewhat less vehemently Poland and the Czech Republic have attacked Russian "aggression" and voiced alarm at the precedent of Moscow claiming a duty to intervene on foreign soil to defend Russian citizens after handing them Russian passports.

Britain, a close US ally, has had its own difficulties with Russia over the murder of dissident ex-KGB agent Andrei Litvinenko in London and the treatment of British oil major BP in a joint venture with Russian business tycoons.

On the other side, France and Germany, which opposed granting Ukraine and Georgia a roadmap to NATO membership in April, have opposed any overt condemnation of Russia. Italian Foreign Minister Franco Frattini has said there should be no "anti-Russia front." Diplomats say such views are shared by Spain, Ireland, Greece, Belgium, Austria and Greece Cyprus.