European Union foreign ministers on Wednesday will consider symbolic action against Russia to show their displeasure at its use of force against Georgia, EU diplomats said. 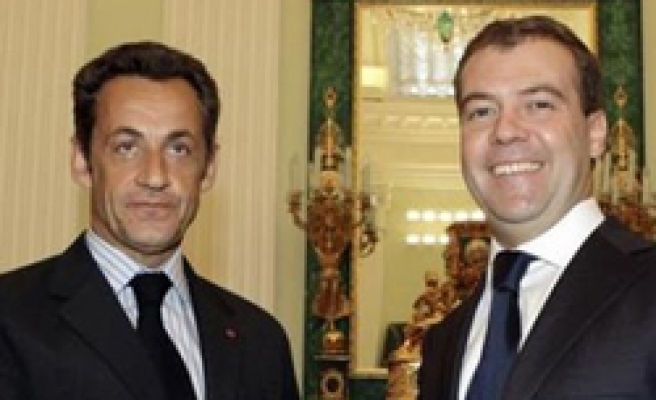 Georgia and Russia agreed in principle to an EU-brokered peace plan over South Ossetia on Wednesday as the U.S. showed disapproval of Moscow's attacks on its neighbour by cancelling a joint naval exercise.

"It is a political document. It 'is an agreement of principles...and I think we have full coincidence of principles," Saakashvili told a joint news conference with Sarkozy.

Earlier on Tuesday Medvedev ordered a halt to military operations in Georgia ahead of Sarkozy's arrival in support of the international peace plan.

But Georgia cast doubt on Moscow's announcement and U.S. officials could not confirm the Russian attacks had stopped.

Sarkozy arrived in both capitals with a peace plan as a way to resolve the conflict that erupted last week when Tbilisi tried to retake by force the pro-Russian region of South Ossetia. Moscow responded with a strong counter-offensive.

He said the text would be presented to a meeting of European Union foreign ministers on Wednesday so they could throw their weight behind it. It would then provide a basis for a U.N. Security Council resolution.

"We do not yet have a peace deal, we have a provisional cessation of hostilities. But this is significant progress," Sarkozy told a joint press conference with Medvedev in Moscow.

But a senior U.S. official in Washington, where the U.S. was seeking ways to leverage its demands on Moscow, noted Russia's bid for WTO and Organisation for Economic Development and Cooperation membership, and current presence in the Group of Eight nations.

"Frankly, the entire Medvedev agenda is at stake here," the official said, speaking on the condition of anonymity. The United States would like to see that agenda succeed, but "that's what's at stake when Russia engages in behaviour that looks like it's from another time."

The United States has sent an envoy to Georgia, but the main shuttle diplomacy between Russia and Georgia has been handled by the European Union, and led by France.

From the EU, Poland, Lithuania and sent their leaders, along with Ukraine's Viktor Yushchenko, to appear alongside Saakashvili at a rally in support of Georgia's conflict with Russia.

European Union foreign ministers on Wednesday will consider symbolic action against Russia to show their displeasure at its use of force against Georgia, EU diplomats said.

Three ministers have been involved in mediation efforts -- France's Bernard Kouchner, Finland's Alexander Stubb on behalf of the Organisation for Security and Cooperation in Europe, and Sweden's Carl Bildt for the Council of Europe.

While some EU countries have called for European peacekeepers or monitors for Georgia's two rebel regions, Abkhazia and South Ossetia, there was no indication Russia, which has the upper hand militarily, would accept such a move.

"There are any number of opportunities for Russia to reverse course and to demonstrate that it is trying to behave according to 21st century principles," she said.

"But I can assure you that Russia's international reputation and what role Russia can play in the international community is very much at stake here.

In its first concrete action of protest, the United States on Tuesday cancelled a Pacific Ocean naval exercise set for next week involving Russia, Britain and France.

"There is no way in good conscience that we could proceed with a joint naval exercise given the state of this crisis," a senior U.S. defence official said on the condition of anonymity as no official announcement had been made.