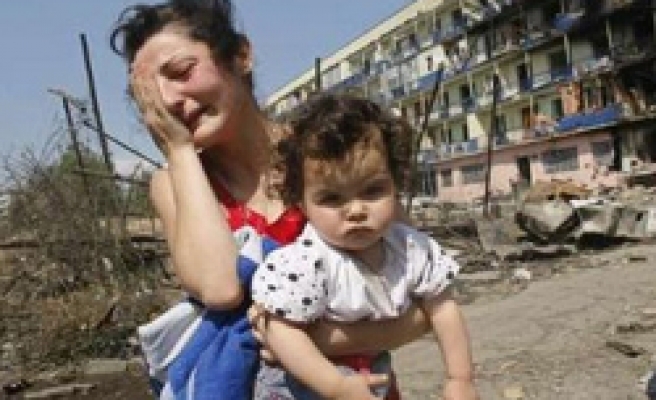 Russian planes bombed a military base and radar installation, the interior ministry said, shortly after France's foreign minister arrived in Georgia on a mediation mission.

"There were two bombings. One at the Kojori military base and another on Mt. Makhata. As far as I know there are no casualties," Interior Ministry spokesman Shota Utiashvili told Reuters.

It was unclear if Kouchner was still in Tbilisi at the time of the bombing.

Earlier on Sunday, Georgia offered Russia a ceasefire and peace talks, and pulled its troops back from the Russian-backed separatist region of South Ossetia in the face of military muscle from Moscow.

The new crisis in the unruly Caucasus has triggered alarm in the West, which gets much of its oil from a pipeline running through Georgia, and led to Cold War-style clashes at the United Nations.

On his final day at the Beijing Olympics, Bush, who has been a big supporter of Georgia's pro-Western leader, said he had spoken firmly to Russian Prime Minister Vladimir Putin about the crisis.

"I was very firm with Vladimir Putin ... I expressed my grave concern about the disproportionate response of Russia," Bush told NBC Sports. "We strongly condemn bombing outside of South Ossetia."

The entourage was due to move on to Moscow on Monday.

After meeting the pro-Western Saakashvili, Kouchner said a "controlled withdrawal of the troops" was his main priority.

"Coming back to the table, negotiations, peace talks, a political solution. That's it. Easy to say, very difficult to do," Kouchner told journalists in Tbilisi.

Russian troops and tanks took control of Tskhinvali, the region's devastated capital, on Sunday after a three-day battle. Moscow said 2,000 civilians were killed and thousands made homeless in a "humanitarian catastrophe".

There has been no independent confirmation of the number of dead and wounded throughout the region.

The simmering conflict between Russia and its small, former Soviet neighbour erupted on Thursday when Georgia sent forces into South Ossetia, a pro-Russian province that threw off Georgian rule in the 1990s.

The West views Georgia as a valuable, if volatile, ally because of its strategic location on the Baku-Tbilisi-Ceyhan pipeline carrying oil from the Caspian to Europe.

Relations between Russia and Georgia have been at a low ebb because of Saakashvili's pro-western policies and his drive to take his country into the NATO alliance -- anathema to Moscow.

Saakashvili appeared smiling but dishevelled to meet Kouchner on Sunday night, before showing him the night-time view of Tbilisi from a hillside.

"It is the most surreal world crisis I could ever imagine," the Georgian leader told reporters.

A Reuters photographer entering Tskhinvali with Russian troops on Sunday saw dead Georgian soldiers lying in the streets and the ruins of buildings devastated in the fighting.

State-controlled Russian television repeatedly spoke of a "humanitarian catastrophe" in South Ossetia after the Georgian attack, with more than 2,000 dead and thousands homeless.

A Georgian government source said on Sunday 130 Georgian civilians and military personnel had been killed and 1,165 wounded, many because of Russian bombing inside Georgia. Russia denies hitting civilian targets.