Georgian forces shot down a Russian fighter jet on Saturday and captured the pilot, Kakha Lomaia, the secretary of Georgia's security council. 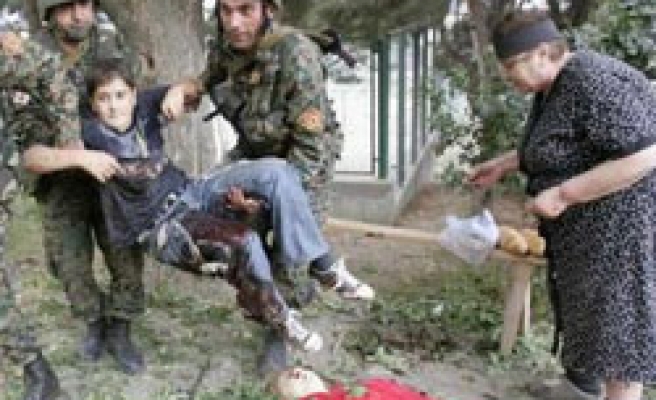 There have been no independent verifications of Russian jets targeting the BTC pipeline.

Georgia may appeal for international military assistance depending on how the conflict in its separatist region South Ossetia develops, the head of Georgia's National Security Council said on Saturday.

"Depending on how the situation develops, ... I don't rule out Georgia appealing for international military assistance," Khakha Lomaia, the National Security Council secretary, told a conference call.

Georgian President Mikheil Saakashvili called for an immediate ceasefire on Saturday and said Russia had launched a full-scale military invasion of his country.

"I call for an immediate ceasefire," Saakashvili said at a news briefing. "Russia has launched a full scale military invasion of Georgia."

Georgia denied on Saturday that Russian forces had seized the capital of Georgia's rebel South Ossetia region, saying its troops remained in control of the town.

"Tskhinvali is now under the complete control of our troops," Khakha Lomaia, the secretary of the National Security Council said in the Georgian capital Tbilisi.

Russia's foreign minister indirectly accused the West on Saturday of contributing to the violence in Georgia's separatist South Ossetia region, saying it was partly to blame for the loss of civilian life there.

"Earlier today ... Russian jet fighters bombed two villages in the upper part of the gorge," Raul Kiria, a spokesman for pro-Tbilisi Abkhaz government in exile, told Reuters by telephone. He did not say whether there was any casualities or damage.

Abkhaz separatists, who have long demanded that Georgia withdraws its forces from the upper part of the Kodori gorge, said its planes were bombing the area, Interfax news agency reported.

US, Georgia calls on Russia to halt military involvement

With Washington the main backer of Georgian President Mikheil Saakashvili, the U.S. State Department called in a top Russian diplomat to urge Moscow to halt military involvement in the conflict that erupted in earnest late on Thursday night.

Georgians in Tbilisi protested against Russian presence in South Ossetia.

Russian troops poured into South Ossetia on Friday, hours after Georgia launched a large-scale offensive aimed at restoring control over the province it lost after a war in the early 1990s.

The bomb hit the five-story building in Gori close to Georgia's embattled breakaway province of South Ossetia when Russian warplanes carried out a raid against military targets around the town.

A Reuters reporter saw five bodies lying in the wreckage of the house. Several soldiers took several injured people to jeeps to be evacuated to hospital.

A man sitting in front of the burning apartment block was seen clutching the body of his dead brother and trying to clean blood from his face.

Russia said the death toll in the two-day conflict had hit 1,500 and was rising.