Georgia has withdrawn completely its forces from S. Ossetia, where they had been fighting Russian troops for control of the separatist capital Tskhinvali, the interior ministry said on Sunday. 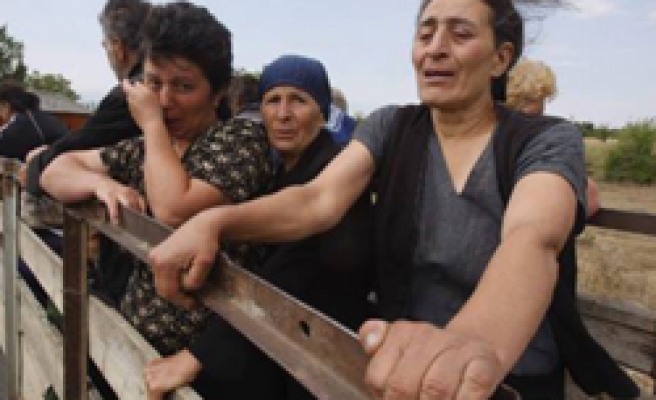 Georgia has withdrawn its forces from breakaway South Ossetia, where they had been fighting Russian troops for control, the Georgian interior ministry said on Sunday.

But the Russian army said Georgian forces were still there.

The announcement of a pullout followed three days of fighting in a Georgian push to take control of the pro-Moscow enclave from separatists, which prompted Russia to pour troops into South Ossetia and launch air strikes inside Georgia.

A Georgian military convoy carrying troops and towing heavy artillery withdrew from South Ossetia through the village of Ergneti, just inside Georgian-controlled territory south of the separatist capital Tskhinvali.

"They have been withdrawn, completely," Georgian interior ministry spokesman Shota Utiashvili told Reuters. He said it was "Because of the heavy civilian casualties Georgia has suffered."

But Interfax quoted Vladimir Ivanov, an aide to the commander of Russian peacekeepers in South Ossetia as saying Georgian forces, artillery and armour remained. "Georgia has not withdrawn forces from South Ossetia," he said.

The conflict in the heart of the volatile Caucasus has raised alarm in the West, vying for influence with Russia over crucial oil and gas supply routes in the region.

Russia poured in troops after the Georgian assault on Friday, dramatically upping the stakes in a long-running stand-off with the ex-Soviet republic over its pro-Western policies and its drive for NATO membership.

Russia bombed a military airfield outside the Georgian capital early on Sunday and Tbilisi said the Russians were also massing troops in Abkhazia on the Black Sea, another rebel region that broke with Tbilisi in the early 1990s after a war.

An EU-U.S. delegation headed for Georgia to try to broker an end to the conflict.

Georgian President Mikheil Saakashvili visited Ergneti, on the border with South Ossetia, after Tbilisi said it had withdrawn its forces.

Georgia said that overnight, Russia had landed 4,000 troops by sea to the coast of Black Sea Abkhazia, the larger of Georgia's two breakaway regions.

In New York, a top U.N. peacekeeping official said there were indications the Abkhaz were preparing to launch a military offensive against Georgian special forces in the upper Kodori gorge in northern Abkhazia.

"At this point we are particularly concerned that the conflict appears to be spreading beyond South Ossetia into Abkhazia," U.N. assistant secretary-general for peacekeeping Edmond Mulet told reporters.

Utiashvili said in the past few hours Russia had brought 6,000 troops into Georgia and a further 4,000 troops by sea. "All of them are waiting for dawn to start active actions," he told Reuters.

He said Russian planes had bombed Georgia's military airfield, 12 km (8 miles) from Tbilisi, at a plant producing Sukhoi Su-25 ground fighters. No one was hurt, but the impact could be heard in downtown Tbilisi.

In a statement, U.N. Secretary-General Ban Ki-moon said he was "profoundly concerned over mounting tensions in the Abkhaz zone." Russia was unbowed by Western criticism of its military offensive.

Putin said Georgia's bid to join the Western alliance NATO -- anathema to Moscow -- was part of the problem.

"Georgia's aspiration to join NATO ... is driven by its attempt to drag other nations and peoples into its bloody adventures," he said, adding that Georgian action bore "elements of some kind of genocide against the Ossetians."

Russian officials said the death toll in fighting that began on Thursday stood at 2,000. Georgia said on Friday that it had lost up to 300 people killed, mainly civilians.

"Maybe it will be quiet in the future. I'm an optimist," said a 69-year-old woman at a bus stop in the town 25 km (16 miles) south of the South Ossetian capital.

Russia is the main backer of South Ossetian separatists and the majority of the population, ethnically distinct from Georgians, have been given Russian passports since the enclave broke with Tbilisi in the early 1990s.

Putin said more than 30,000 refugees from South Ossetia had fled over the border in the past 36 hours. Russian officials said two of Moscow's warplanes had been shot down, 13 soldiers killed and 70 wounded.

U.S. President George W. Bush described Russian bombing inside Georgia as a dangerous escalation. Russian President Dmitry Medvedev told him by phone the only solution was for Georgian troops to quit the conflict zone.

Georgia's parliament approved a state of war across the country for the next 15 days, while Russia accused the West of contributing to the violence by supplying Georgia with arms.