The reform treaty, which has to be ratified by all EU members, hit an obstacle earlier this month when Irish voters rejected it in a referendum. 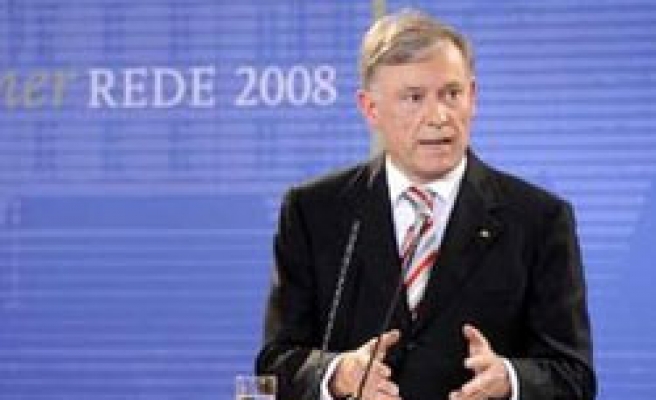 German President Horst Koehler said on Monday he would wait to sign the European Union's reform treaty until the country's top court had ruled the law approving the document was constitutional.

Germany's upper and lower houses of parliament have already passed a law approving the Lisbon Treaty, but the president has to sign it for parliament's decision to be formally ratified.

The reform treaty, which has to be ratified by all EU members, hit an obstacle earlier this month when Irish voters rejected it in a referendum.

EU nations are still discussing what to do next with the treaty, which aims to ease decision-making in the 27-member bloc.

In Germany, where there is widespread support for the treaty, maverick Bavarian conservative politician Peter Gauweiler and the far-left Left party have lodged appeals with the Constitutional Court to have the document stopped. They argue the treaty is incompatible with Germany's democratic principles and would infringe the rights of the country's deputies.

The Constitutional Court is expected to make its decision in the autumn and few experts think it will declare the treaty unconstitutional.

"In view of the ongoing petitions ... the President is complying with a request from the Constitutional Court," said a statement issued by Koehler's office, adding he would hold off signing the treaty until the court had made its decision.