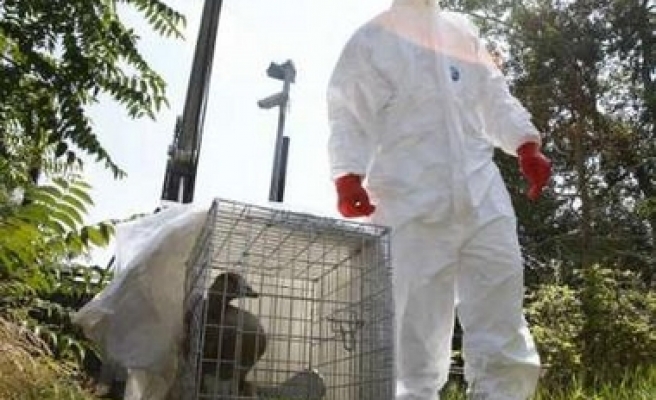 Under European Union rules, a buffer zone is being set up in the province of Nuremberg in the southern state of Bavaria, a ban of hunting of wild birds, movement of poultry other than to the slaughterhouse. Only meat that has undergone EU specified food controls may be moved outside the buffer zone, the European Commission said on Monday in a statement.

"These measures are aimed at preventing the spread of avian influenza from wild birds to poultry or other captive birds, as well as the contamination of products," the Commission stated.

Three wild birds found dead in Nuremburg were found to have the highly pathogenic H5N1 strain of bird blu. The members of cases as now rise to six, with five swans and one goose infected, according to the Friedrich Loeffler veterinary institute. It is the first outbreak of bird flu in Germany in 2007. The cases are also the first to be reported in wild birds in the EU this year.

H5N1 was confirmed in February 2006 in some 100 wild swans on the Baltic Sea island of Ruegen in northern Germany, as well as in a dead cat, prompting the local authorities to declare a state of emergency.

The virus was last year identified in dead migratory birds in the southern states of Bavaria and Baden-Wuerttemberg, and the northern regions of Mecklenburg-Western Pomerania, Schleswig-Holstein and Brandenburg.

H5N1 was detected in more than 700 wild birds in the EU in 2006. H5N1 has been confirmed this year in geese and turkey farms in Hungary, the United Kingdom and in the Czech Republic.

The H5N1 virus has killed nearly 200 people worldwide out of more than 300 known cases, according to the UN World Heath Organisation (WHO). The great majority of victims have been from southeast Asia, where the disease was first reported in 2003.