Senior government officials have said a new period has begun in Turkey with the decision of the Constitutional Court not to ban the ruling AKP. 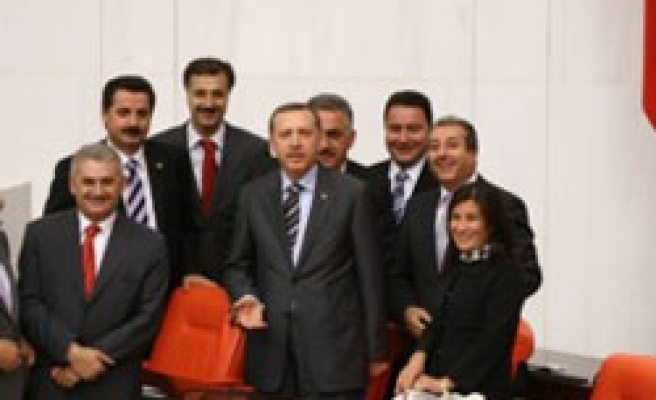 "A new period has started to strengthen democracy and law. We will use the opportunity given by the Constitutional Court's decision," said Bekir Bozdağ, deputy chairman of the AK Party.

Prime Minister Recep Tayyip Erdoğan is expected to reshuffle the Cabinet and some high-ranking posts in the party. As of Oct. 1, when Parliament will return from recess, changes are expected in the party's group administration. Sources said the reshuffling will not involve radical changes in the Cabinet but will be limited to a few ministers. An early election is not expected. The case against the AK Party, which was charged with being a "focal point of anti-secular activities," was filed on March 14 by Chief Prosecutor Abdurrahman Yalçınkaya, who requested that the party be dissolved and that 71 current and former members, including President Abdullah Gül and Erdoğan, be banned from political activity for five years.

However, only six of the court's 11 judges ruled for the party's closure, one vote short of the number necessary to actually close down the party. Chief Justice Haşim Kılıç said he believed the AK Party "would make the necessary analysis and learn the necessary lesson." Kılıç started his announcement on the party's fate Wednesday night by criticizing Turkey's politicians for not passing a regulation that would make it more difficult to open party closure cases. The court ruled for financial penalties to be imposed on the AK Party. Erdoğan evaluated the top court's decision with the party's senior officials by emphasizing two issues -- speeding up the reforms in the European Union accession process and working on a new constitution.

AK Party deputy Mehmet Çiçek said the court's decision has placed a big responsibility on the party's shoulders. "Our top priority should be to strengthen Turkish democracy and law. … A judiciary reform is unavoidable. Anybody who protects Turkey's interests should pledge to work for a democracy in line with Western standards. Turkey would lose a great deal if the opportunity cannot be taken advantage of," he noted.

In response to discussions about an early election to renew the government's mandate, Nihat Ergün, the deputy chairman of the AK Party's parliamentary group, said March 2009 local elections should be a priority. "We have local elections in eight months. The public will vote not only for the candidates but for the parties at that time. This will be a rehearsal for the general election. It is too early to talk about an early election at this stage," he said.

As of Oct. 1, the AK Party is expected to change three of its five parliamentary group chairmen. Then changes will be made to the party administration and the Cabinet.

When it comes to the Cabinet, radical changes are not expected considering that Erdoğan changed only one-third of the previous Cabinet after the July 22 election. He is expected to request the retirement of some of the ministers who have been serving for six years.

Following these changes to bring fresh faces to the party leadership, the top priority will be the new constitution. Currently, Turkey has the 1982 constitution, drafted under military rule, which restricts many individual freedoms. The draft constitution prepared by a committee commissioned by the government will be brought back to the table. The parliament speaker is expected to call on the parties to nominate members for a constitution compromise commission.

AK Party's Ahmet İyimaya, chairman of Parliament's Justice Commission, said the Constitutional Court's decision calls for "positive politics, positive government and positive opposition." He indicated that the court stressed the uneasiness it has over the Law on Political Parties, which makes it so easy to ban parties.

"The Parliament has an historic duty. Reading the tendencies in society and producing solutions are important for the government first and the rest of the political system. The court's decision doesn't point to any losers; everybody is a winner," İyimaya stated.

Mehmet Şandır, Nationalist Movement Party (MHP) parliamentary group deputy chairman, said his party agrees with the top court's call and it is ready for reconciliatory solutions. "We will support new political party laws making initiatives which would be backed by both the AK Party and the opposition Republican People's Party (CHP). Let's remove party closure laws. Let's introduce a system which would stress individual responsibilities. If a party hasn't been involved in violence and terrorism but is not supported by the public, it can be closed down at the ballot box."