The government will announce its ultimate decision on whether it will allow labor unions to organize celebrations in Taksim at a press conference today at 11 a.m. 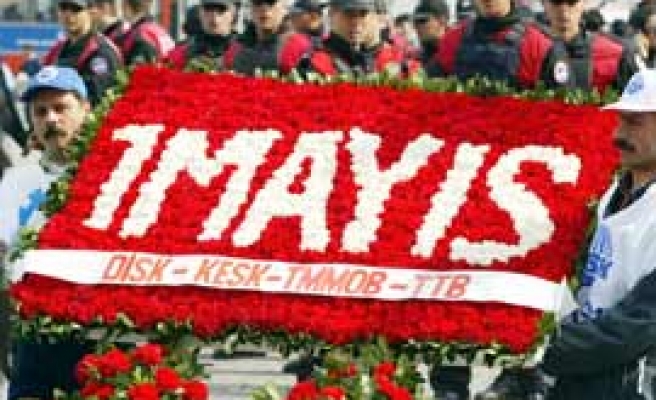 The leaders of Turkey's largest labor unions met with Prime Minister Recep Tayyip Erdoğan yesterday morning and conveyed to him their wish to hold a large commemoration ceremony in İstanbul's Taksim Square for the victims of an infamous attack in the square more than 30 years ago, hinting at the possibility of the government honoring the unions' request.

The government will announce its ultimate decision on whether it will allow labor unions to organize celebrations in Taksim at a press conference today at 11 a.m.

In previous years, only leaders and senior administrators of unions have been granted access to the square to lay flowers to commemorate the 1977 victims. The unions this year, according to KESK President İsmail Hakkı Tombul, would like to have a commemoration ceremony in which all participants would be allowed to celebrate. "We want 20, 000 or 30,000, however many come, to be allowed in," he told Today's Zaman.

May 1 has always been a source of conflict in Turkey, where it has not been celebrated as an official holiday since the coup of Sept. 12, 1980. Workers have not been allowed to celebrate May 1 in Taksim Square since 1977. To the unions, celebrations in Taksim have great symbolic significance because during Workers' Day celebrations in the square on May 1, 1977, known as "Bloody May 1," shots were fired into the crowd from surrounding buildings. Five people were killed by gunfire, one was run over and killed by a police tank and 30 others were trampled at the entrance of Kazancı Street, near the square, in the chaos that ensued.

Speaking at his party's parliamentary group meeting at noon, Erdoğan said his government was "considering" the unions' request. "Marginal, illegal groups want to exploit this festival and disrupt life in the city for the day," he said.

He also said union representatives could lay a wreath at the Taksim monument and make a press statement. "However, if there are 5,000 or 10,000 people, this would not be a press statement, but something else," he said.

Tombul, Türk-İş leader Mustafa Kumlu and DİSK President Süleyman Çelebi spoke for about an hour in the prime minister's chambers in Parliament. Labor and Social Security Minister Faruk Çelik was also present at the meeting.

Tension over May Day

Every year, the approaching date of May 1 creates considerable tension in Turkey. In a statement he made on Monday, İstanbul Governor Muammer Güler said he had filed a criminal complaint against those attempting to organize demonstrations in Taksim.

Yesterday Erdoğan also appealed for calm and called on potential protestors to not respond to provocation. He also expressed his wish that May 1 would be celebrated as a day of brotherhood and solidarity. President Abdullah Gül released a statement as well, calling for calm and common sense ahead of May Day.

Opposition leaders on May Day

In his party's parliamentary group yesterday, main opposition Republican People's Party (CHP) leader Deniz Baykal criticized the ban on May 1 celebrations in Taksim Square. "It is about time we get over the incidents that occurred 31 years ago," he said, adding that it was wrong to assume that there would be provocation and agitation if events were held in the square. "Turkey still has banned areas? That ban is inside your head," he said, addressing those who oppose allowing Taksim demonstrations.

Asserting that shutting Taksim Square to May 1 demonstrations was in itself provocative, Baykal added: "The entire world is celebrating May 1 in the largest squares in their countries. We should celebrate this way. Show this courage, and we and the unions will support it. Let's start celebrating May 1 in our biggest square like the rest of the world."

The Nationalist Movement Party (MHP) also had a party group meeting yesterday. MHP leader Devlet Bahçeli asked union leaders to put off their request to celebrate in Taksim Square until next year. He recalled that Parliament has approved the official recognition of May 1 as the Day of Unity and Solidarity, although without a day off from work, but he said this workers' festival was being made into a subject of polemics.

He said the tension over the Taksim celebrations was being perpetuated by stubbornness. "Our wish is that the celebrations take place in peace and harmony and that stubbornness that could lead to tension is brought to an end. I call on the government to take measures against potential agitators and ensure that the millions of workers of Turkey get to celebrate the day with its full meaning," he added.