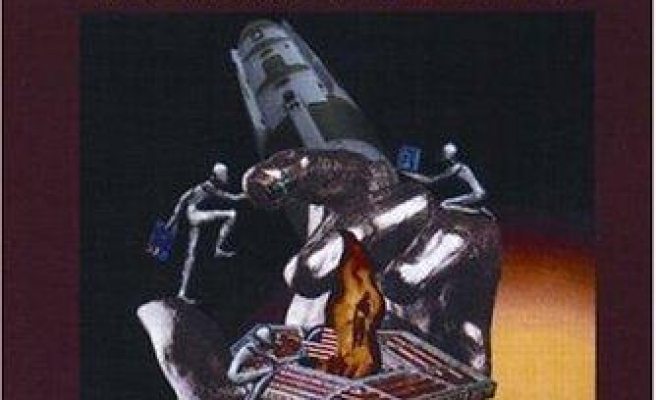 In a riveting work of investigative reporting, Jeffrey St. Clair shines a merciless searchlight into some of the murkiest corners of the Pentagon, exposing the sweatheart deals between the defense department and its favorite coterie contractors: Boeing, Bechtel, Halliburton and the Carlyle Group.

Among the many explosive revelations in Grand Theft Pentagon is a first--hand account from an emissary to Afghanistan of how the Bush administration refused an offer by the Taliban to turn over Osama Bin Laden and his top leadership. They wanted total war instead. First on Afghanistan, then Iraq. In shocking detail, St. Clair unveils how the Bush administration hired a team of marketing and PR executives to sell their fraudulent war claims to a panic--striken public, a complicit congress engorged with arms PAC money and a gullible national press corps. Here you will find scathing portraits of the enablers of this corrupt system---- from George Bush and Donald Rumsfeld, to Senators Ted Stevens and the pseudo--maverick John McCain---- and the war profiteers themselves, from DynCorp and Lockheed to the devious machinations of the RAND, Corp and Magnequench, the missile company that outsourced its work to China.

In the wake of 9/11, the Pentagon was handed a blank check, which it used to resurrect some of the most baroque relics of the Cold War, from the B--2 steath bomber and the F--22 fighter to the most fanciful of all boondoggles, the $80 billion Star Wars missile defense system. In this hard--hitting exposé, St. Clair shows, through the use of the Pentagon's own damning internal documents, that none of these big ticket weapons systems are needed and that none of them has ever worked as advertised. Indeed, these destabilizing arms programs have backfired, hurling the nation to the brink of bankruptcy and sparking a new global arms race.

From the war room at the White House to the board room of Halliburton, Grand Theft Pentagon is a harrowing trip through the new imperial order, where the weapons companies make a killing, while the citizens of the world cower under the shadow of perpetual war.

In days of yore in London town the pickpocket, technically known as the "file," never worked alone. He or she was preceded by the "bulk", a belligerent fellow good at starting fights, the perfect condition for the file industriously to ply the trade. Daniel Defoe explained their maneuvers back then; Jeffrey St. Clair explains the shenanigans of the bulk and file nowadays. Lockheed, Halliburton, Bechtel play the file; Vietnam, Somalia, Kosovo, Gulf I and Gulf II the work of the bulk. St. Clair names them --the outsourcers, the stuntmen, the war profiteers, the arms dealers, the fat cats, executive fixers, and neo--cons. Alternatively, the file in smoother operating mode would team up with the "buttock", an expert at distracting the public by charms or promises of eternal salvation. Today's buttocks are perception managers, PR gurus, spin meisters, information warriors, psy--operators, fundamentalists, and con men. Certainly, stuff happens, as Donald "the File" Rumsfield said. St. Clair tells us how and why in phraseology worthy of Tom Paine, with an attitude that would bring a smile to Mark Twain, and with the scholarly exactitude of an actual criminal indictment. It's a brilliant book for our hideous times-- comic, reforming, rousing. Heave the rascals out, buttock, bulk, and file!

Peter Linebaugh, author of The London Hanged and co-author The Many-Headed Hydra.

With brilliance and grace, suitable outrage and humor, Jeffrey St Clair throws open the Pentagon and its pervasive culture of corporate corruption much as a century ago Lincoln Steffens exposed the disgrace of meat packing and more. As with Steffens' government and business predators, the rot and madness will no doubt go on, but after St. Clair's equally enduring work, we can never say we didn't know why it happened--or how it all smelled.


Jeffrey St. Clair's Grand Theft Pentagon is a brilliant account of how trillions of dollars go into the pockets of arms makers and how the Pentagon's preeminent claim on the budget has become a huge trough for them. This is the best book on how the defense system really functions, who gains-and how we all lose thereby. Extremely well written and full of convincing cases and insight, this book should be read by everyone who wants to know how-and why--America operates.

Gabriel Kolko, Distinguished Professor Emeritus at York University, author of Anatomy of a War and Another Century of War.

Jeffrey St.Clair's invaluable book is a vivid profile of the sordid deals brokered by warmomger politicians and war-profiteer corporations. With the skill of a high-class barber he uncovers all the bald patches of the imperial administration.

Tariq Ali, author of Bush in Babylon and The Clash of Fundamentalisms

Only by reading "Grand Theft Pentagon" will the reader know that it is the height of flattery to call it merely thievery. The Pentagon, Congress, defense corporations, and ­ to its undying shame ­ the mainstream press are not just helping each other steal our money, they are trashing our security and raping our liberty. Examine this must read book, and weep for your country.

Bribery, kickbacks, no-bid contracts, selling war, selling torture, buying politicians, pervasive sleaze. It's all here in grim detail in Jeffrey St. Clair's powerful chronicle of the theft of the U.S. defense industry by rapacious war profiteers and the increasing militarization of U.S. policy and U.S. society. This is a sad tale of the financial, political, and moral corruption that now characterizes so much of America, left as well as right.

Jeffrey St. Clair is a muckracker par excellence. Muckracking tends to date quickly; old scandals are no longer scandalous. What makes St. Clair's work so compelling, and so likely to endure, is his focus on people, the villains and the very few heroes of the piece.

St. Clair does not caricature; he feels his subjects like a novelist. George Bush and Donald Rumsfeld come alive in all their creepiness, but when the curtain falls it is Bunnatine Greenhouse, the unsung Halliburton whistleblower, who gets center stage. St. Clair brings ample research and devastating argument to his attack on indecent powerbrokers. In the end, though, it is his humanity that illuminates the tale.

Michael Neumann, professor of philosophy at Trent University, author of The Case Against Israel.

Jeffrey St. Clair's stalwart and scathing indictment of the war criminals running this country should inspire readers to do all they can to cease complicity with this lawless crowd. Grand Theft Pentagon builds a case for U.S. people to stop collaborating with these rulers and their callous disregard for the non-rich and non-white.

Kathy Kelly, co-founder Voices in the Wilderness, author of Other Lands Have Dreams.

"This book should become a text in political science and public administration courses at every university. It is an invaluable guide to understanding the institutionalized corruption built into US policy."

"Jeffrey St. Clair is the Seymour Hersh of environmental journalism."

Opening Statement:
Versailles on the Potomac

Part One: Capitalism's Last Utopia
1. The Duke and the Enterprise
2. Bush Was Offered Bin Laden, But Wanted a War
3. How to Sell a War
4. No Bid, No Sweat
5. Contract Casino
6. Torture Air, Incorporated

Part Three: the Profiteers
1. Sticky Fingers: the Making of Halliburton
2. Lockheed and Loaded: The Company That Runs the Empire
3. Straight to Bechtel: "More Powerful Than the US Army"
4. The Saga of Magnequench
5. When War is Swell: the Bush Crusades and the Carlyle Group
6. Boeing and Nothingness
7. How the Rand Corp. Concocted the Colombian War

Part Four: Larcenies: Grand and Grander
1. The F-22: Tiffany's on Wings
2. Haywire: the New Navy Fighter Bombs Test
3. The Predator: Flying Blind
4. Use 'Em or Lose 'Em: Tiny Nukes are Better Nukes
5. Patriot Gore: the Fatal Flaws in the Patriot Missile
6. Attack of the Hog Killers: Why the Generals Hate the A-10
7. My Corporation Tis of Thee: the General, GM and the Stryker
8. Hey Brother Can You Spare a Million?: How Neil Bush Succeeded in Business Without Really Trying
9. It's a Family Affair: How Uncle Bucky Made a Killing
10. Bunker Busters and City Levelers

Part Five: Pie in the Sky
1. How to Restart the Arms Race in the Name of Saving the World
2. Of Sibbers and Penetration Aides
3. Star Wars Comes to Alaska
4. Treaty's End
5. Star Wars Goes Online...Crashes