Italian Foreign Minister Massimo D'Alema said that he is personally against any cross-border operation. 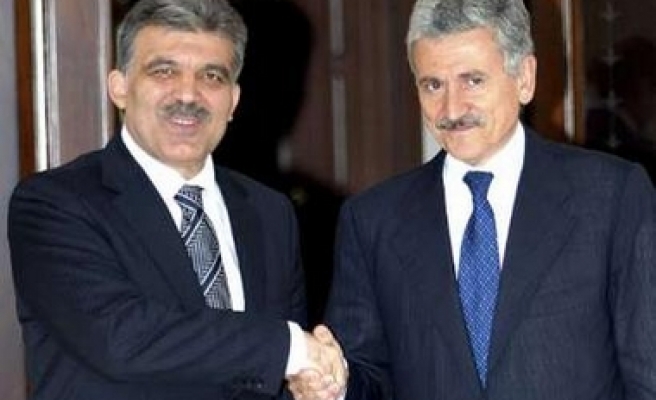 Italian Foreign Minister Massimo D'Alema said that he is personally against any cross-border operation.

"It will be for best interests of everybody not to cause more tension in a region which is actually tense," D'Alema told a joint press conference with Turkish Foreign Minister Abdullah Gul in Ankara.

D'Alema stated that launching dialogue mechanisms in international platform will be more effective in fight against terrorism.

"I strongly support Turkey's EU membership and will do my best to help Turkey in this process, Italian FM Massimo D'Alema told Turkish FM Abdullah Gul on Wednesday.

According to diplomatic sources, D'Alema told Gul that his most important message is the support he extends to Turkey for Turkey's relations with the EU.

During their meeting, D'Alema underlined importance of continuity of Turkey-EU relations, and said that minor ups and downs in this process are not important.

D'Alema stated that Cyprus problem should be solved under the roof of the UN, underscored importance of resumption of direct talks between the two sides in the island, and said that his country will contribute to a possible solution under the banner of the UN.

Affirming that it "is their shame" not to conclude the direct trade regulation, prepared for Turkish Republic of Northern Cyprus (TRNC), D'Alema said that this issue should be solved but Turkey should implement the additional protocol to the Customs Union.

During their meeting, the two ministers also discussed bilateral relations, while Gul asked D'Alema's support for Turkey's candidacy for a non-permanent seat at the UN Security Council for 2009-2010.

On the other hand, D'Alema said that what they should do in the first stage is to make a call to the parties to end violence and encourage them to find solution through peaceful means, when commenting on recent incidents in Gaza Strip.

"I personally support deployment of an international force in Gaza," D'Alema noted.

D'Alema qualified remarks of Israeli PM Ehud Olmert as positive, but said he thinks that there are some factors to be discussed in detail.

According to D'Alema, an international force to be deployed there should be one that can ensure implementation of an agreement.

"What we should do now is to closely monitor the situation and increase our calls so that other Arab countries, which have an impact to end this violence, can hear," he stressed.

Meanwhile, Gul said, "as Turkey, we are exerting efforts to prevent them. We have talked to the parties for several times in last weeks. I told them that such clashes make peace even more difficult and prevent any success in Palestinian cause."

However, Gul stated that deployment of a new international force in the region is an issue that has to be assessed well.

"These clashes in Palestine have to be halted. Also, all the world should give a helping hand to the Palestinian people because as things get worse there and as social and economic problems reach unbearable dimensions there, such incidents occur more and more easily. If we do not raise hopes for future of Palestinians, the chaos there grows and this does not help anybody," Gul added.