Turkish President Gul said Monday that Romania, "Turkey's friend an ally", made important contributions to the preservation of peace and stability in the Balkans and the Black Sea Region. 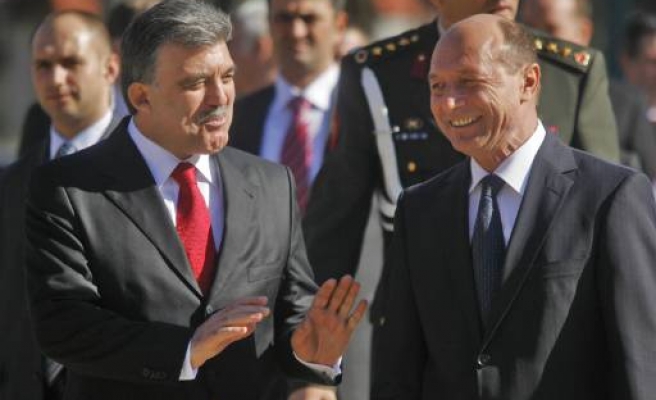 Turkish President Abdullah Gul who is currently in Romania on a formal visit, said Monday that Romania, "Turkey's friend an ally", made important contributions to the preservation of peace and stability in the Balkans and the Black Sea Region.

Gul recalled that 80,000 Turks are living in Romania and said they assume a mission as to bridge the two countries.

Gul who said the commercial relations between the two countries were progressing rapidly and pointed out that the investments of Turkish businessmen in Romania already amounted 2 billion USD. Adding that the trade volume between Romania and Turkey approached 8bn USD, Gul said he hoped this figure would reach 10bn USD by 2010.

President Gul said they discussed ways and means to boost economic relations, cooperation in energy sector especially in Nabucco project, during his meeting with Basescu.

Gul also recalled that the NATO summit would be held in May in Romania and noted that they also reviewed perspectives on NATO and its policies.

Romanian President Traian Basescu said, on his part, Romania, without any hesitation, would continue to support Turkey's membership provided that it met the EU criteria.

Basescu said he reiterated that Romania could extend support to Turkey in overcoming some of the negotiation chapters and said, "we made preparations, and are ready to exchange experts."

When a Romanian reporter recalled Romania's decision to support participation of Gaz de France to the Nabucco Project and asked if Basescu had been able to change the views of the Turkish side, President Gul said they would discuss and announce their position on this issue later.