Gül calls on Armenia to respect territorial integrity of neighbors

President Gül said he has not yet decided whether to attend the soccer match between Turkish and Armenian national teams. 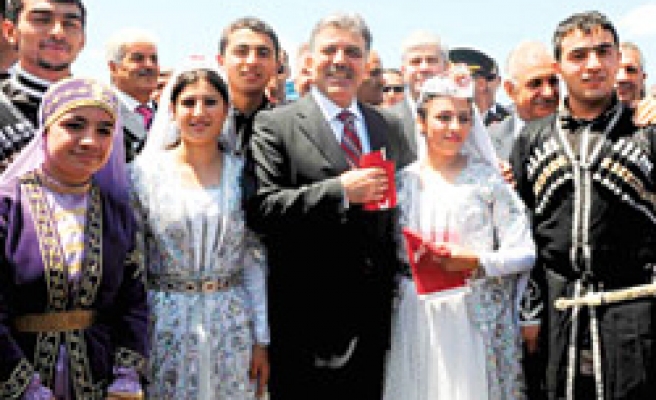 President Abdullah Gül stated yesterday that Turkey wants good relations with its neighbors and stability in its region but sent a veiled message to Armenia that it should respect the territorial rights of neighboring Azerbaijan if it wants to be part of regional integration projects.

"Countries in the region should support projects that will further develop neighborhood relations and establish peace," Gül told an Armenian journalist during a visit to the far eastern province of Kars, on the border with Armenia. "If countries want to take part in these projects, they should respect the territorial integrity of other countries," he added.

Turkey severed its ties and closed its border with Armenia in 1993 in protest of Armenian occupation of the Azerbaijani territory of Nagorno-Karabakh. Gül's emphasis on respect for territorial integrity is a sign that Turkey is not planning to reverse its policy on ties with Armenia any time soon unless Yerevan agrees to take a step back in the Nagorno-Karabakh dispute, despite a recent thaw in relations.

Ankara also says the normalization of ties depends on Armenia's formal recognition of the current borders with Turkey and changing its policy of calling for worldwide recognition for Armenian 1915 claims.

Armenian President Serzh Sarksyan has invited Gül to a World Cup qualifying match between the national soccer teams of the two countries in September and has called for dialogue to help the normalization of ties, saying this will be mutually beneficial. Foreign Minister Ali Babacan said last week that Turkish Foreign Ministry officials had talks with Armenian officials in Switzerland earlier this month. But the Foreign Ministry insisted that the talks did not mean a change in Turkey's policy.

Gül said yesterday he has not yet decided whether to attend the soccer match between Turkish and Armenian national teams.

Gül yesterday visited Ani, an uninhabited medieval Armenian city in Kars on the Armenian border, in a sign of reconciliation with Armenia. Today, he will attend a ceremony to inaugurate the construction of the Turkish part of a regional railway passing through Turkey, Georgia and Azerbaijan. The route excludes Armenia. The presidents of Azerbaijan and Georgia are also attending the inauguration ceremony.

With Turkish-Armenian ties severed over disputes, Turkey has taken steps to deepen regional cooperation on energy, transportation and trade with Azerbaijan and Georgia. The planned Baku-Tbilisi-Kars railway will link the three countries and revive the historical Silk Road by connecting Central Asia and the Far East to Europe via Turkey.

Construction of the Georgian section of the railway, expected to begin service in 2011, began in November of last year. Gül had joined Georgian President Mikheil Saakashvili and Azerbaijani President Ilham Aliyev at the inauguration ceremony. Some 1.5 million people and 6.5 million tons of cargo are expected to be transported via the railway in the first year following its launch. The project is estimated to cost $450 million.