Gul: Iraq does nothing against PKK

Turkish FM Abdullah Gul says Turkey tries to contribute to Iraq's security but Iraqi authorities simply do nothing to prevent PKK activities within their borders, at the 2nd Democracy and Global Security Conference. 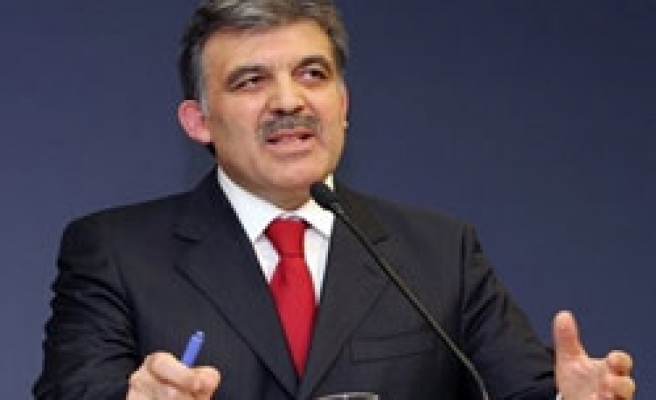 "According to the data we have, nearly 3,500-3,800 PKK terrorists have taken shelter in camps in north of Iraq and provided their logistic support, weapons and ammunition from this region.

"The most distressing thing is that although Turkey tries to everything in its power to contribute to security, well-being and stability of Iraq, Iraqi authorities simply do nothing to prevent PKK activities within their borders," Turkish Foreign Minister & Deputy Prime Minister Abdullah Gul said on Thursday.

Taking the floor at the Second Istanbul Democracy and Global Security Conference, Gul said, "all governments aim at creating a more secure and more livable world for their citizens. A better world is a world where terrorism does not lurk around, people are not subject to bomb attacks, children do not become drug addicts and violence does not prevail."

"In today's world, threats have become complicated and asymmetric. No one was able to predict the September 11th events. And, it is not easy to predict what is going to happen henceforth. This situation entails us to develop and pursue policies which are as multilateral and coordinated as threats themselves," he said.

"Democracy and democratization are not enough to obliterate terrorism. They can only isolate terrorists. On the other hand, we should not make concessions from democracy as fighting against terrorism," he said.

"We spend billions of dollars every year to prevent proliferation of nuclear, biological and chemical weapons as well as organized crimes which jeopardize national and international security. In fact, we should spend that money for prosperity and development," he said.

Gul stressed, "Turkey takes places at the intersection of organized crime routes due to its geographical position. We have also been fighting against terrorism since 1970s. Therefore, we have been advocating from the very beginning that international cooperation and solidarity are essential in the fight against terrorism.

"For instance, our security forces and customs authorities impounded 8.2 tons of heroin only in 2005. This was 91 percent of total heroin seizure in 25 EU-member countries. In the last three years, our security forces intercepted more than 170 thousand illegal migrants."

"Armenian terrorist organization killed 34 diplomats and their relatives in 1970s and 1980s. In 2003, Turkey became target of the al-Qaeda. 57 people were killed in four suicide attacks in Istanbul.

"On the other hand, PKK has been targeting not only security forces but also civilians in Turkey since 1984. In PKK's acts of terror, more than 35 thousand people including a number of children, women and babies were killed in the last 23 years," he said.

"Recently, PKK's acts of terror have accelerated again. This is because PKK finds shelter in north of Iraq. Our security forces seized 2 tons of plastic explosives brought in from Iraq. We expect the Iraqi government to control its own borders," he said.

Gul added, "Turkey does not have any territorial pretensions. But our government is determined to take all kinds of measures to safeguard security of its citizens. Turkish people have the right to live without feeling the threat of terrorism."