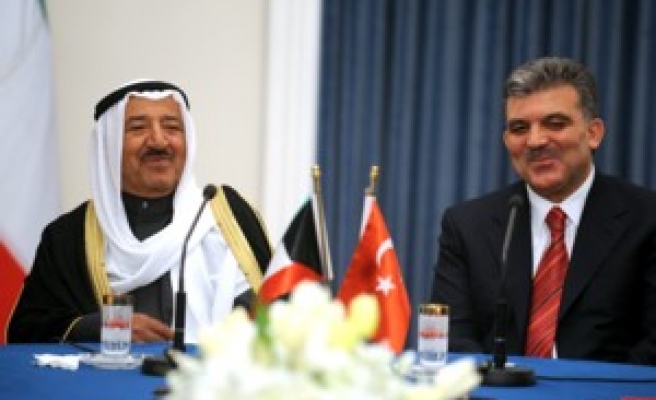 Speaking at the Turkish-Kuwaiti Business Council Meeting in Istanbul, President Abdullah Gul stressed : "My brother Kuwaiti Amir al-Sabah and my presence here show that we are encouraging cooperation between businessmen of the two countries. We urge you to cooperate," Gul also said.
"Not desired level"

However, economic relations with Kuwait are not at the desired level, said an eminent Turkish businessman, on Wednesday .

"Those relations gained momentum in the past few years, however they are not at the desired level," complained Rona Yircali, chairman of the executive board of Foreign Economic Relations Board (DEIK).

Delivering a keynote speech at the Turkish-Kuwaiti Businessmen Meeting in Istanbul, Yircali indicated that the trade volume between the two countries is a mere 310 million USD. "We would be pleased to see more investments of Kuwaiti businessmen in Turkey," he said.

In the past few years, Turkey has paid special attention to developing commercial relations with Gulf countries, Yircali also noted. He stressed that Turkish and Kuwaiti banks must establish direct contacts to help businessmen of both countries to receive letter of guarantee.

In 2007, Turkey's exports to Kuwait amounted 220 million USD while its imports were 92 million USD.