Macedonia's failure to receive an invitation to join NATO in Bucharest contributed to a domestic political crisis that has seen early parliamentary elections called for June 1. 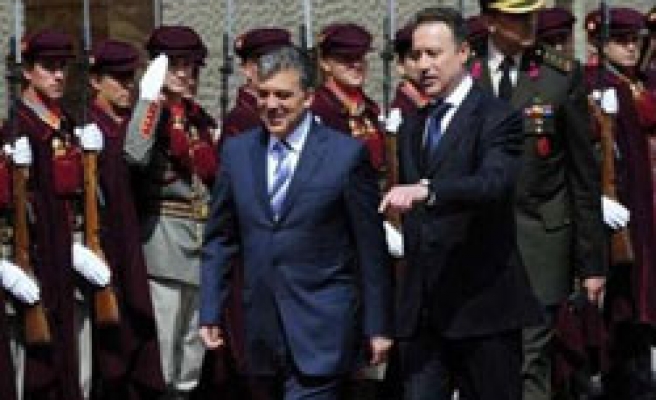 President Abdullah Gül yesterday pledged a continuation of Turkey's continuous support for Macedonia's integration into European-Atlantic bodies and said a decision to block NATO membership for the Balkan country at a summit of the alliance last month was unfair.

Gül was speaking at a joint press conference following a meeting with Macedonian President Branko Crvenkovski.

Gül arrived in Macedonia last week for a presidential summit of Central European countries, an annual event he attended as guest of honor.

"Macedonia has been done an injustice. ... I repeated once more to Mr. President that Turkey has been supporting NATO's open door policy and that Macedonia should be a member of NATO since it has fulfilled [requirements], among other things. In Bucharest we, as Turkey, did our best, but unfortunately a shadow was cast over the NATO summit. I hope that a solution will be found in short order and that Macedonia will become a full member of NATO," Gül said, while also reiterating support for Macedonia's bid for European Union membership.

Macedonia had hoped to be invited to join NATO along with Albania and Croatia at the alliance's summit in Bucharest last month. But Athens blocked the invitation to protest Macedonia's name, saying it implies a claim to a northern region of Greece also called Macedonia. Athens says it will not allow Macedonia to join NATO or the EU until the name issue is resolved.

Macedonia's failure to receive an invitation to join NATO in Bucharest contributed to a domestic political crisis that has seen early parliamentary elections called for June 1.

Macedonia is officially referred to as the Former Yugoslav Republic of Macedonia, or FYROM, at the United Nations and other international bodies. But more than 100 countries -- including Turkey, Canada, Russia and the United States -- have recognized it as Macedonia.

For his part, Crvenkovski expressed pleasure over Turkey's support for his country while implicitly criticizing Greece's stance at the latest NATO summit.

"The sole reason for having a negative result at the Bucharest summit of NATO is exploitation of the right to veto. But Turkey, beyond demonstrating its own support, also sought support from other countries as it did before," said Crvenkovski.

At the end of the two-day summit at the lake resort of Ohrid, the leaders of 19 Central and Southeastern European countries agreed that EU will not be complete unless all Western Balkan states are included. "There is no viable political alternative to the integration into the European Union for the candidate and aspiring states," Crvenkovski said after the summit. "However, the region is still not irreversibly on the road to Europe."

The Central European Initiative was formed in 1989 to strengthen ties between the region and the EU. Its 18 members are Albania, Austria, Belarus, Bosnia and Herzegovina, Bulgaria, Croatia, the Czech Republic, Hungary, Italy, Macedonia, Moldova, Montenegro, Poland, Romania, Serbia, Slovakia, Slovenia and Ukraine. Ten are EU members, three are official EU candidates and five have not joined the union. Turkey attended as a guest.

Speaking at the summit Gül said Turkey's membership would help transform the EU into a global actor. "The prospect of ... accession to the EU remains the main incentive for the continuation of reforms in this region," Gül said. "For peace and stability to become permanent, we need solidarity and understanding more than ever."

Participants of the summit extended support to Turkey's EU membership in their speeches. While Crvenkovski said Turkey was an exceptionally important country for the EU, Slovenian President Danilo Turk, whose country has been serving as the rotating EU president, pointed out that Turkey's membership was key to the EU becoming a global power. Turk said pre-set perspectives for EU membership could not be changed after the beginning of negotiations.

Turkish citizens of Macedonian origin and Macedonian citizens of Turkish origin play an important role in the improvement of bilateral relations between Macedonia and Turkey, President Gül also said yesterday at the press conference.

Around 4 percent of Macedonia's population is of Turkish origin. Three Turkish political parties will be running in the upcoming elections: the Turkish Democratic Party, the Party of the Turkish Movement of Macedonia and the Turkish National Unity Party. Gül called for unity among Turks. "Show loyalty to the country in which you've been living; work for its prospering and to strengthen it," he also said.