Gul: No technical obstacle but political for EU

"We have told the EU that Turkey does not consider any technical obstacle before negotiation process in case political matters are not included in the technical talks," Turkish FM Abdullah Gul said on Monday. 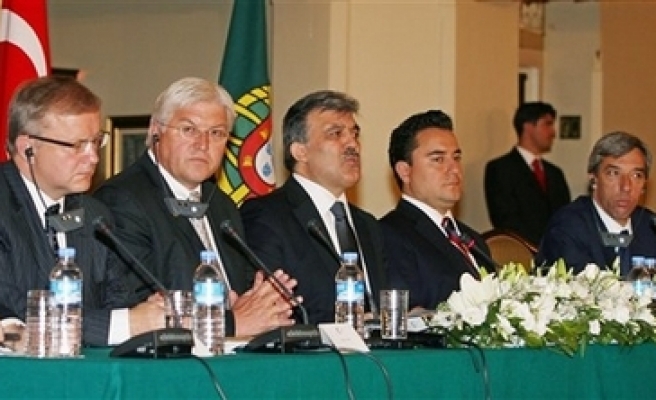 "We have told the EU (pertaining to Turkey's EU membership process) that Turkey does not consider any technical obstacle before negotiation process in case political matters are not included in the technical talks," Turkish Foreign Minister & Deputy Prime Minister Abdullah Gul said on Monday.

Foreign Minister Frank Water Steinmeier of Germany which currently holds the rotating EU presidency, Foreign Minister Joao Cravinho of Portugal which will take over the presidency from Germany and EU Enlargement Commissioner Olli Rehn participated in the meeting hosted by Gul.

Speaking at a joint news conference held after the meeting, Gul said the meeting was very fruitful.

"The meeting was satisfactory. We had the opportunity of discussing the relations and different ideas," Gul said indicating that Turkey's negotiation process was reviewed.

Expressing belief that the same stance would be displayed during the rotating presidency of Portugal in the next period, Gul said, "Turkey fulfilled its responsibilities within the framework of negotiation process," and recalled the road map that was prepared with the collaboration of all institutions and disclosed by State Minister Ali Babacan last April.

Gul said Turkey would continue to fulfill its obligations between 2007 and 2013 when matters are handled on technical basis, indicating that all the works in question were first of all were for the benefit of Turkish nation.

Underlining that Cyprus matter was discussed at the meeting as a political issue, Gul said, "we have underscored that this issue should be settled under the roof of the U.N."

"We also had the opportunity to exchange views on issues like Iran, Iraq, Middle East peace process, incidents in Lebanon, Syria's inclusion to peace process, Central Asia and Caucasus."

"We also discussed fight against terrorism. We have briefed the EU executives about the recent attacks of the terrorist organization on civilians and security forces," Gul remarked.

Noting that northern Iraq was also discussed at the meeting, Gul said, "Turkey attaches importance to Iraq's territorial integrity and does not have any secret agenda. I have also clearly remarked that Turkey has the right to take any kind of measure in case of any move or terrorist act on its border against itself."

Gul said the EU party, which has included PKK in list of terrorist organizations, also gave strong messages on the issue and stated that the EU would be in close cooperation with Turkey in efforts to deal with terrorism.

Asked about domestic political developments and election process, Gul said, "Turkey's reform process for EU membership would continue with an increasing pace. We are looking to the future. Process has started for the elections set to take place on July 22nd. Democracy functions in Turkey."

German Foreign Minister Frank Walter Steinmeier said he did not get the impression that Turkey would launch a cross-border military operation into Iraq.

Steinmeier said that they discussed the matter at the meeting. "We asked Turkey about its position regarding the issue. My dear colleague Mr. Gul told us that Turkey should protect its people against terrorist acts. He especially told us how important the issue was in Turkey and on border between Turkey and Iraq. But indeed, I did not get the impression that Turkey would launch a cross-border military operation from what he told us," Steinmeier said.

Steinmeier also pointed out reform process carried out in Turkey and said Turkey did a lot in its EU membership bid.

"We, as the European Union, attach great importance to Turkey's reform process. We tried a lot to carry on and to speed up negotiations process during Germany's rotating EU presidency," he said.

Steinmeier expressed his disappointment that the expected developments about Cyprus problem have not occurred during Germany's EU presidency.

"It is also disappointing that there is no progress on direct trade. I am sure that Portugal will work on that as the EU president," he said.

Reminding that Turkey will hold general and presidential elections in the coming months, Steinmeier said, "I am sure that every power and institution in Turkey will assume its responsibility. I hope that there will be no other alternatives than Turkey's path towards the EU and its democratic reforms."

"The European Union (EU) is on Turkey's side in the fight against terror," said the European Commissioner for Enlargement Olli Rehn, on Monday.

Rehn said: "I will attend an important energy conference in Istanbul on Tuesday and will elaborate on Europe's energy strategy within the framework of membership negotiations" .

Rehn began his speech by condemning the terrorist attack in Ulus district of Ankara on May 22nd, 2007.

"I want to express our solidarity with the Turkish people. Turkey can be sure that the EU is on its side in the fight against terror," noted Rehn.

Olli Rehn indicated that "the EU is pleased with the progress Turkey has made in the EU process."

"We expect three more chapters to be opened," he underlined.

According to Rehn, technical negotiations are "the walls and roof of the building.

However, the base of the building is the actual reforms made." Rehn stressed that the new government of Turkey must re-activate the reform process.

"Freedom of expression, religious freedoms, women's rights, union rights must be enlarged. Political forces in Turkey should act together to modernize and reform Turkey. This is important not only for the EU but also for Turkey," stated Rehn.

Rehn underscored that political stability and democratic development are highly important for Ankara.

"We expect the reform process in Turkey to speed up after the national elections," said Joao Cravinho, State Secretary for Foreign Affairs and Cooperation of Portugal, on Monday.

Cravinho remarked that, as the next rotating president of the EU, Portugal will gladly carry Turkey's EU process further.

Cravinho stressed that in the 18 months covering the rotating presidency of Germany, Portugal and Slovenia, relations with Turkey have high priority.

"We will continue to work with Turkey and help the process to go further," noted Cravinho.

Meanwhile, Robert Cooper, the head of external affairs dept. of the EU, indicated that they handled topics such as the Middle East.

"Both sides seem to have parallel views on the Middle East", noted Cooper.

He remarked that the issue of Iran was also discussed.

"Turkey helped the overture of a new channel with Iran in nuclear talks," stressed Cooper.

"Turkey's role in this matter is extremely important. We want to develop our relations with Turkey on security matters. The EU will assume prominent duties in Afghanistan and Kosovo. Turkey will be an important partner in this matter," underscored Cooper.