Gul: No US pressure to not sign energy deal with Iran

Turkish President Abdullah gul said that Iran's nuclear program was on the top of the agenda during Iranian President Mahmoud Ahmadinejad's two-day visit to Turkey this week. 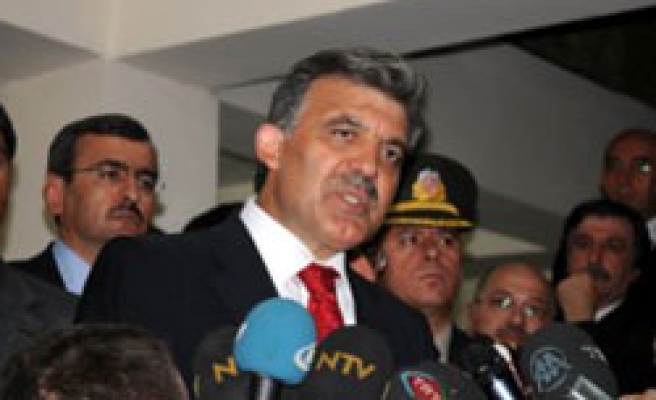 Turkish President Abdullah Gul said Saturday that Turkey considered its own interests and national benefits, denying claims that the United States put pressure on Turkey not to sign a deal with Iran on energy.

"Turkey is a big country and does not do anything just because someone asked to," Gul told reporters who asked why Turkey did not sign an energy deal with Iran.

Gul said Turkey wish to have good relations with its neighbors for peace and stability in the region.

Iran's nuclear program was on the top of the agenda during Iranian President Mahmoud Ahmadinejad's two-day visit to Turkey this week, Gul said.

"Should not we care about such an issue near our border, in our region, if something extraordinary happens? Was it the only Iraqis who suffered from the war in Iraq? Did we say 'we don't care'? We were affected a lot. Everybody should do their best, so should we, to bring that nuclear issue to a successful end. Most significant part of my talks was about this matter," Gul said.

Recalling that a very detailed agreement on fight against terrorism was signed with Iran at Ahmadinejad's visit, Gul said Iran was combatting PJAK, a branch of the terrorist organization PKK.

He said Turkey and Iran could not sign a deal on energy because preparations on the deal were not completed yet. Gul said energy ministers of the two countries would work to carry forward the memorandum of understanding which was signed earlier.

Asked whether he would travel to Armenia to watch the World Cup qualifying round match between Turkish and Armenian national football teams, Gul said they were evaluating the issue.

He said Turkey wants stability in its region, adding that Caucasia Stability Platform would cover all region.

"Precautions should be taken to solve frozen problems in the region, avert possible wars and future instabilities caused by these frozen problems," Gul said. "We do not have hostility with anyone."