Gul tells Armenia to solve its problems with Azerbaijan

Foreign Minister Abdullah Gul said Armenia should work to resolve its territorial disputes with neighboring Azerbaijan, suggesting that this would help the landlocked country to resolve its problems with Turkey, too. 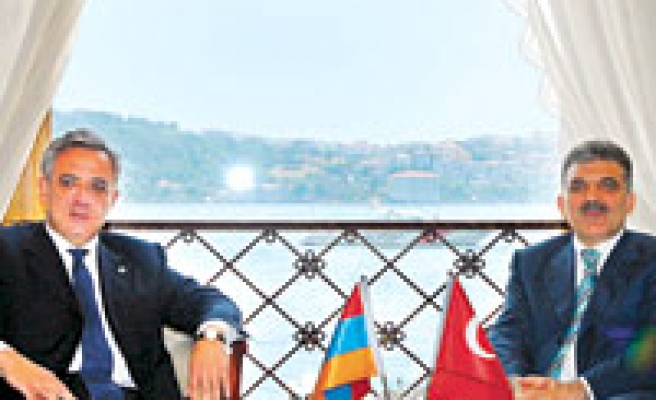 Foreign Minister Abdullah Gul said Armenia should work to resolve its territorial disputes with neighboring Azerbaijan, suggesting that this would help the landlocked country to resolve its problems with Turkey, too.

Gül made the suggestion at a rare meeting with Vartan Oskanian, the Armenian foreign minister, on the sidelines of a meeting of the Black Sea Economic Cooperation (BSEC) in Istanbul.

Neighbors Turkey and Armenia have no formal ties due to disputes over Yerevan’s support for Armenian diaspora efforts worldwide to win international recognition for an alleged genocide of Armenians at the hands of the Ottoman Empire as well as due to the continuing occupation of Nagorno-Karabakh, an Armenian enclave within Azerbaijan, by Armenian forces.

Turkey also refuses to open its border gate with Armenia, closed following Armenian occupation of Nagorno-Karabakh in the past decade, unless there is an improvement in Armenia’s stance.

Oskanian said at the closed-door meeting with Gül that Armenia wanted to improve ties with Turkey and stressed that the reopening of the border would help mend fences, a Turkish diplomat close to the talks said. Gül, however, responded that Armenia should work to resolve the Nagorno-Karabakh dispute.

“We also expect some gestures from you,” the diplomat quoted Gül as saying, in reference to a Turkish proposal to set up a joint committee of Turkish and Armenian academics to study the genocide allegations. At a press conference following his talks with Gül, Oskanian expressed disappointment at the lack of progress.

He said unlike leaders of the rest of other member countries of BSEC, Armenian President Robert Kocharian declined to come to İstanbul to attend the 12-nation organization’s 15th anniversary summit because there were no diplomatic relations between Turkey and Armenia.

He noted that Kocharian had come to Turkey when he first came to power in 1998, to attend a meeting of the Organization for Security and Cooperation in Europe (OSCE) because he then had high hopes for peace and progress. “Unfortunately there has been no change since then,” he told the conference.

Oskanian reiterated that Armenia had no precondition for improvement of relations with Turkey but complained that Turkey had clear conditions to take any step in this direction. The Armenian foreign minister criticized Turkish conditions to open the border gate and claimed that they were not “justifiable.”

Armenians claim up to 1.5 million of their kinsmen died in a systematic genocide campaign during World War I, but Ankara categorically rejects the label, saying that both Armenians and Turks died in civil strife during World War I when the Armenians took up arms for independence in eastern Anatolia and sided with Russian troops invading the crumbling Ottoman Empire.