Gul: The meaning of my name is 'beneficial woman'

Hayrunnisa Gul, the wife of Foreign Minister and former presidential candidate Abdullah Gul, said that her headscarf was only a pretext for the discussions about her husbands’ candidacy. 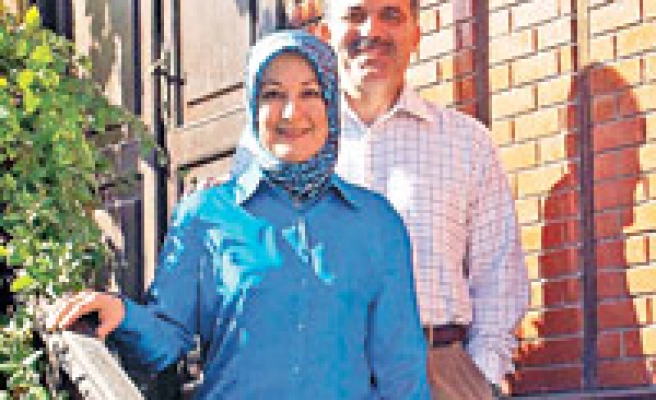 Hayrunnisa Gul, the wife of Foreign Minister and former presidential candidate Abdullah Gul, said that her headscarf was only a pretext for the discussions about her husbands’ candidacy.

Mrs. Gul claimed that all these development will lead to “hayır” -- a benefit or something good -- in the end. She believes that Turkey will ultimately become more democratic and will head in a better direction and that the election of the president by the public is a good step. “The meaning of my name is “hayırlı kadın” (beneficial woman). I hope this crisis will bring more benefits in the end.”

In an interview to Sabah daily on Sunday Mrs. Gül said that she did not think that her candidacy for being the “first lady” would be reacted against solely because of her headscarf. “I thought that Turkey had left this behind, but I was wrong. My husband, during his time [as foreign minister], performed all his duties in a very good way and established very good friendships with people abroad. Turkey has become a role model in the Middle East. We have prestige now and the only thing that makes me sad now is the shadow over our prestige, otherwise we will overcome all these issues, I know.” When asked how she felt about all these reactions to her headscarf, she said, “I wonder why they are that critical towards me, they don’t know me.” She said that she had noticed the anger on the faces of the people at the mass “republican rallies.”

“When you look at the past of these angry people you notice that they grew up without love. This is why I am not angry at them. Life is short and beautiful, why are we consuming it with these arguments? Until now, along with my husband, I have hosted thousands of guests, visited more than 40 countries, and not even one single person complained -- I don’t want to say only about my headscarf, but my personal preferences in general were never the subject even once. They accepted me as Hayrünnisa, as a human being; they did not define me by my headscarf.”

When Mrs. Gül was reminded that her headscarf was seen as a danger, and asked if she considered herself a danger, she answered that people should learn how to hold empathy. “What they are afraid of? Do they think that everybody’s head would be forcibly covered? …You cannot make me do anything by force. People have considered those women who are sitting at home as oppressed. I will never allow any oppression against my freedom… No-one can make me uncover myself, and I would never accept that anyone should be forced to cover their head.”

Mrs. Gül said that they did not want their daughter to wear a headscarf, because her education is very important and they want her to continue her education without problems. “But one day I saw her in the street, she was covering her head in secret. She told me that, ‘You as a covered mother aren’t allowing me to do the same as you.’ At that moment I became very sad. My son and my daughter had both studied in the industrial engineering department, what is the difference between them? But while my son was going to school freely, my daughter had problems. We should see this problem as a question of women’s rights.”

Mrs. Gül underlined that when her husband told her that he could be a candidate for the presidency the first thing that she felt was a feeling of responsibility. She pointed out that their daughters’ wedding was planned for July 22, but that now it had been postponed to an unknown future date, and as a mother she was sad about that.