Gunman kills hostage at Nasa base

A gunman has killed a male hostage and himself during a stand-off at Nasa's Johnson Space Center in Houston, Texas. 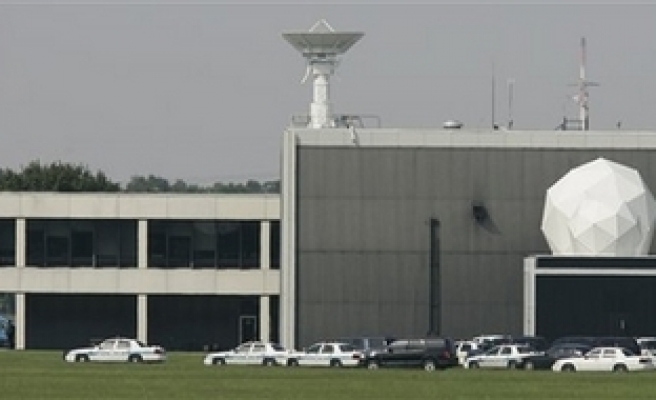 Police, who had surrounded the scene and entered when they heard a gunshot, also found a second hostage, a woman, who was alive but tied up with tape.

Police Capt Dwayne Ready said officers were called to the scene at about 1340 (1840 GMT) after a man was seen with a gun and two shots were heard.

Nasa named the gunman as Bill Phillips, a contract engineer at the site.

The hostages were named as David Beverly and Fran Crenshaw, though the names were not confirmed by police.

"Any organisation would take a good, hard look at the kind of review process we have with people," he said.

Agency officials said mission operations were not interrupted by the incident.

Capt Ready said police were making contact with the suspect when they heard a shot.

"Believing that the suspect may have shot himself the decision was made to make entry," he said.


Employees watched the drama on television as they were locked down

"As our Swat team members made entry they did indeed determine that the suspect shot himself one time to the head.

"Also, on the same floor there was one... hostage that was shot - we believe that may have occurred in the early minutes of this whole ordeal."

The slain male hostage had been shot in the chest. The female hostage was found unharmed nearly four hours after the stand-off began.

A Nasa contractor, Jacobs Engineering, earlier told the BBC that one of its employees was involved in the incident.

After the gunman was reported, Building 44, housing communications equipment and engineering offices, was evacuated and an email was sent to staff across the sprawling complex telling them to remain inside their buildings.

A second email was later sent telling employees they could go home whenever they wished.

Nasa employee Michael Zolensky, who studies cosmic dust, told Associated Press news agency that workers at the complex were watching television news reports of the drama as it unfolded.

The Houston police department told the BBC they sent a helicopter, a canine unit and a special weapons team to the space centre.

Negotiators were also on the scene and a bomb squad was sent as a standard precaution.

An intermediate school near the building was also secured for several hours.

The stand-off came less than a week after a gunman killed 32 students and teaching staff at Virginia Tech university before killing himself.

There has been a rash of security alerts across the US, which is also marking the eighth anniversary of the Columbine school massacre in which 15 people died.