Two days after the worst killing spree in modern U.S. history, the shooter again assaulted Virginia Tech — though this time it was in videos and photographs. 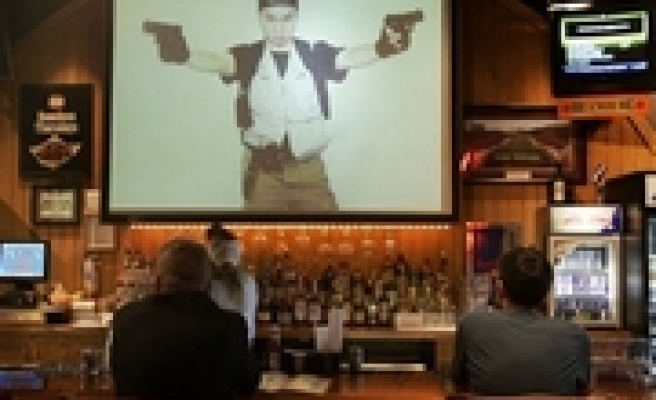 Two days after the worst killing spree in modern U.S. history, the shooter again assaulted Virginia Tech — though this time it was in videos and photographs. In the images, mailed to NBC midway through his rampage, 23-year-old Cho Seung-Hui delivered a snarling, profanity-laced tirade about rich "brats" and their "hedonistic needs."

"You had a hundred billion chances and ways to have avoided today," the 23-year-old says in a harsh monotone. "But you decided to spill my blood. You forced me into a corner and gave me only one option. The decision was yours. Now you have blood on your hands that will never wash off."
NBC said the package contained a rambling and often incoherent 23-page written statement, 28 video clips and 43 photos. Several of the photos showed him aiming handguns at the camera.

The package arrived at NBC headquarters in New York on Tuesday and was opened Wednesday, two days after Cho killed 32 people and committed suicide. It bore a Postal Service time stamp showing that it had been mailed at a Blacksburg post office at 9:01 a.m. Monday, about an hour and 45 minutes after Cho first opened fire.

"I saw his picture on TV and when I did I just got chills," said Kristy Venning, a junior from Franklin County, Va. "There's really no words. It shows he put so much thought into this and I think it's sick."
The package helped explain one of the biggest mysteries about the massacre: where the gunman was and what he did during that two-hour window between the first burst of gunfire, at a high-rise dorm, and the second attack, at a classroom building.

Earlier in the day, authorities disclosed that more than a year before the massacre, Cho was accused of sending unwanted messages to two women and was taken to a psychiatric hospital on a magistrate's orders and was pronounced a danger to himself. But he was released with orders to undergo outpatient treatment.

The disclosure added to the rapidly growing list of warning signs that appeared well before the student opened fire. Among other things, Cho's twisted, violence-filled writings and sullen, vacant-eyed demeanor had disturbed professors and students so much that he was removed from one English class and was repeatedly urged to get counseling.
Some of the pictures in the video package show him smiling; others show him frowning and snarling. Some depict him brandishing two weapons at a time, one in each hand. He wears a khaki-colored military-style vest, fingerless gloves, a black T-shirt, a backpack and a backward, black baseball cap. Another photo shows him swinging a hammer two-fisted. Another shows an angry-looking Cho holding a gun to his temple.
He refers to "martyrs like Eric and Dylan" — a reference to the teenage killers in the Columbine High School massacre.

NBC News President Steve Capus said the package arrived in Tuesday afternoon's mail, but was not opened until Wednesday morning. It was sent by overnight delivery and apparently had the wrong ZIP code, NBC said.
An alert postal employee brought the package to NBC's attention after noticing the Blacksburg return address and a name similar to the words reportedly found scrawled in red ink on Cho's arm after the bloodbath, "Ismail Ax," NBC said. Capus said that the network notified the FBI around noon, but held off reporting on it at the FBI's request, so that the bureau could look at it first. NBC finally broke the story just before police announced the development at 4:30 p.m.
It was clear Cho videotaped himself, Capus said, because he could be seen leaning in to shut off the camera. State Police Spokeswoman Corinne Geller cautioned that, while the package was mailed between the two shootings, police have not inspected the footage and have yet to establish exactly when the images were made. Cho repeatedly suggests he was picked on or otherwise hurt. "You have vandalized my heart, raped my soul and torched my conscience," he says, apparently reading from his manifesto. "You thought it was one pathetic boy's life you were extinguishing. Thanks to you, I die like Jesus Christ, to inspire generations of the weak and the defenseless people."
A law enforcement official said Cho's letter also refers in the same sentence to President Bush and John Mark Karr, who falsely confessed last year to having killed child beauty queen JonBenet Ramsey. The official spoke on condition of anonymity because the person was not authorized to speak to the media.
Earlier Wednesday, authorities disclosed that in November and December 2005, two women complained to campus police that they had received calls and computer messages from Cho. But the women considered the messages "annoying," not threatening, and neither pressed charges, Virginia Tech Police Chief Wendell Flinchum said.
Neither woman was among the victims in the massacre, police said.
After the second complaint about Cho's behavior, the university obtained a temporary detention order and took Cho away because an acquaintance reported he might be suicidal, authorities said. Police did not identify the acquaintance.

On Dec. 13, 2005, a magistrate ordered Cho to undergo an evaluation at Carilion St. Albans, a private psychiatric hospital. The magistrate signed the order after an initial evaluation found probable cause that Cho was a danger to himself or others as a result of mental illness. The next day, according to court records, doctors at Carilion conducted further examination and a special justice, Paul M. Barnett, approved outpatient treatment.

A medical examination conducted Dec. 14 reported that that Cho's "affect is flat. ... He denies suicidal ideations. He does not acknowledge symptoms of a thought disorder. His insight and judgment are normal." The court papers indicate that Barnett checked a box that said Cho "presents an imminent danger to himself as a result of mental illness." Barnett did not check the box that would indicate a danger to others.
It is unclear how long Cho stayed at Carilion, though court papers indicate he was free to leave as of Dec. 14. Virginia Tech spokesman Larry Hincker said Cho had been continually enrolled at Tech and never took a leave of absence.

A spokesman for Carilion St. Albans would not comment. Though the incidents with the two women did not result in criminal charges, police referred Cho to the university's disciplinary system, Flinchum said. But Ed Spencer, assistant vice president of student affairs, would not comment on any disciplinary proceedings, saying federal law protects students' medical privacy even after death.

Some students refused to second-guess the university. "Who would've woken up in the morning and said, `Maybe this student who's just troubled is really going to do something this horrific?'" said Elizabeth Hart, a communications major and a spokeswoman for the student government.
One of the first Virginia Tech officials to recognize Cho's problems was award-winning poet Nikki Giovanni, who kicked him out of her introduction to creative writing class in late 2005.

Students in Giovanni's class had told their professor that Cho was taking photographs of their legs and knees under the desks with his cell phone. Female students refused to come to class. She said she considered him "mean" and "a bully." Lucinda Roy, professor of English at Virginia Tech, said that she, too, relayed her concerns to campus police and various other college units after Cho displayed antisocial behavior in her class and handed in disturbing writing assignments.

But she said authorities "hit a wall" in terms of what they could do "with a student on campus unless he'd made a very overt threat to himself or others." Cho resisted her repeated suggestion that he undergo counseling, Roy said.
Questions lingered over whether campus police should have issued an immediate campus-wide warning of a killer on the loose and locked down the campus after the first burst of gunfire.

Police said that after the first shooting, in which two students were killed, they believed that it was a domestic dispute, and that the gunman had fled the campus. Police went looking for a young man, Karl David Thornhill, who had once shot guns at a firing range with the roommate of one of the victims. But police said Thornhill is no longer under suspicion.