Gunmen wearing Iraqi army uniforms shot and killed 15 men Saturday in a Kurdish Shiite village northeast of Baghdad and a U.S. soldier was killed and another seriously wounded while searching for three comrades missing for a week after an ambush. 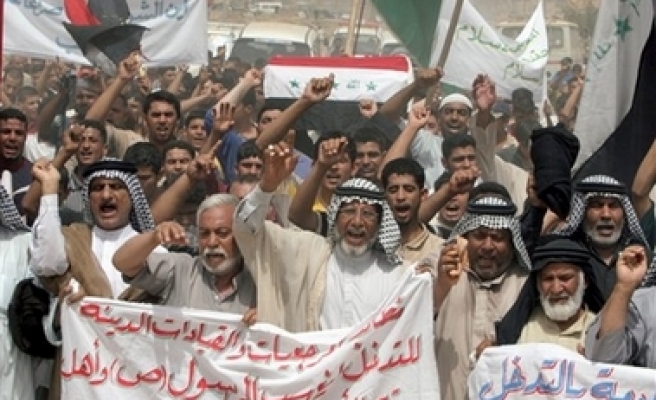 In Baghdad, at least three mortar shells or rockets slammed into the Green Zone after British Prime Minister Tony Blair had arrived for talks with Prime Minister Nouri al-Maliki and other Iraqi leaders. One person was injured, but it was unclear how far Blair was from the blasts.

The attack against the villagers occurred early Saturday when gunmen wearing army uniforms entered the village of Hamid Shifi, about 60 miles northeast of Baghdad. They rousted families from their homes and opened fire on the men, killing 15 of them, an Iraqi general and a Kurdish political party said.

The victims were Kurdish Shiites, according to a statement posted on the Web site of the Patriotic Union of Kurdistan.

The village is located in Diyala province where violence has risen sharply in the past six months.

Also Saturday, the U.S. command reported five more American soldiers were killed, all but one the day before. One soldier was killed Saturday by a roadside bomb south of Baghdad, the military said.

The others died Friday — one in the western province of Anbar, one by small arms fire south of Baghdad and two by a roadside bomb and small arms fire in the northwestern part of the capital. No more details were released.

U.S. officials said the soldier who died Saturday was killed while searching for three 10th Mountain Division troopers abducted a week ago in an attack in which four Americans and an Iraqi were killed.

Another soldier was seriously wounded during Saturday's search, the officials said.

The U.S. military said it has expanded the search for the soldiers beyond the farming area just south of Baghdad where the May 12 attack occurred.

Earlier Saturday, nine people were taken into custody in the town of Amiriyah, a longtime Sunni insurgent area, following "tips and information leads in the disappearance of three U.S. soldiers."

Tribes in the Amiriyah area are related to those who live close to where the soldiers were seized in an attack in which four U.S. troops and one Iraqi were killed.

In addition, U.S. troops arrested two people in Baqouba "associated" with the al-Qaida command network, the U.S. said. Baqouba is 35 miles northeast of Baghdad, and it was unclear whether their arrest was directly related to the search for the missing soldiers.

An al-Qaida-linked group has claimed responsibility for the kidnapping, which four American soldiers and an Iraqi were killed.

The focus of the search is around the village of Quarghuli, 12 miles south of Baghdad, where the soldiers were captured following an attack on their observation post.

In Baghdad, the British Embassy compound was hit by a round during the Green Zone barrage, according to security officials, who spoke on condition of anonymity because they were not supposed to release the information.

It was not known whether Blair was in the compound when the shell exploded.

Blair's official spokesman downplayed the incident, saying there was "nothing to suggest anything other than business as usual."

Mortar and rocket attacks against the Green Zone have increased in recent weeks, raising alarm among U.S. officials who live and work in what had been considered the only secure haven in the turbulent Iraqi capital.

The U.S. ordered embassy employees to wear protective vests and helmets after four Asian contractors working for the U.S. government were killed May 3 when rockets or mortars slammed into the Green Zone, 3.5-square-mile area along the Tigris River in the center of the city.

This month, reporters covering the visit of Vice President Dick Cheney were hustled into a secure area when a large explosion rattled windows in the U.S. Embassy. Cheney spokeswoman Lea Anne McBride said the vice president's meeting "was not disturbed and he was not moved."

In March, U.N. Secretary-General Ban Ki-moon ducked for cover when a shell exploded about 50 yards away during a joint news conference with al-Maliki.

Iraqi military officials also said the commander of Iraqi troops in Diyala province had been replaced after allegations that he was biased against Sunnis.

"I think it is a good decision and the replacement should have taken place months ago," Talabani said, citing "a lot of mistakes" that had "made the security situation worse and out of control."

Sectarian tensions have been rising in the area in recent weeks after a brief lull following the Feb. 14 launch of the Baghdad security crackdown.

In Saddam Hussein's hometown of Tikrit, 80 miles north of Baghdad, police received the bodies of seven men killed in clashes the night before in Samarra. It was unclear whether they were combatants or civilians caught up in the violence which has been increasing in the mostly Sunni city north of Baghdad.