Hamas and Fatah agree on a new truce

Rival Fatah and Hamas agreed a new truce on Wednesday, May 16, after internecine clashes killed 14 people, threatening to plunge the Palestinians into a new political crisis. 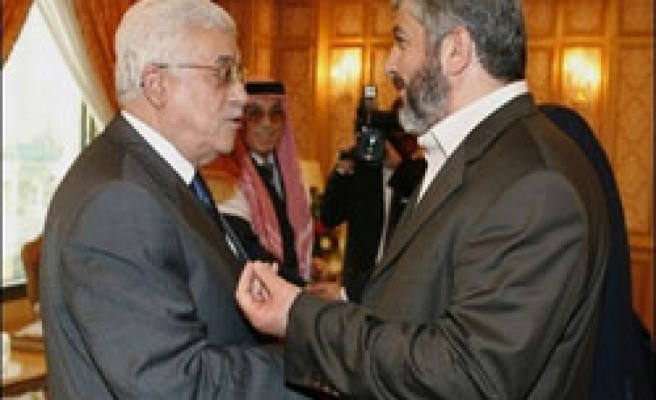 Rival Fatah and Hamas agreed a new truce on Wednesday, May 16, after internecine clashes killed 14 people, threatening to plunge the Palestinians into a new political crisis.

"We will unilaterally implement a ceasefire from 8 this evening," Hamas spokesman Fawzi Barhoum told the Doha-based Al-Jazeera news channel.

Five were killed Wednesday in an attack on the Gaza home of top security official Rashid Abu Shbak, a Fatah leader who escaped unscathed.

Another died in clashes in an adjacent neighborhood later in the day.

The latest bout of fictional fighting has killed at least 40 Palestinians, turning Gaza City into a ghost town.

Abbas and Hamas's exiled political supremo Khaled Meshaal agreed Wednesday to work to halt the bloodshed which is endangering the national unity government only two months after its hard-labor formation.

Three previous ceasefires agreed upon by the two rivals since fighting flared on Sunday have collapsed within hours of their taking effect.

It was not immediately unclear whether the new ceasefire agreement would be different.

In December and January, about 100 Palestinians died in factional fighting in the Gaza Strip.

As if Palestinians were not through enough, Israel carried out two air raids against killing four people in Gaza, medics and witnesses said.

One Hamas fighter was killed and four wounded in northern Gaza after an air strike in the town of Jabaliya, security sources and medics said.

An Israeli army spokeswoman said that "Israeli forces carried out an aerial attack against a launching cell after it fired at Israel and confirmed hitting them."

An earlier Israeli strike against a Hamas training camp in southern Gaza killed three and wounded 30, according to medics.

Israeli Prime Minister Ehud Olmert has ordered a "severe response" to continuing rocket fire from Gaza, which has wounded four Israelis since Sunday.

"After consultations ... it was decided to authorize the army and the security services to proceed with a series of actions aimed at hitting those who fire the rockets and their leaders," his office said

The four deaths brought to 5,683 the number of people killed since the outbreak of Al-Aqsa intifada in September 2000, the vast majority of them Palestinians, according to an AFP count. Last Mod: 16 Mayıs 2007, 23:58
Add Comment