Palestinian factions Fatah and Hamas signed on Sunday a Yemeni-sponsored reconciliation deal, a witness to the signing said. 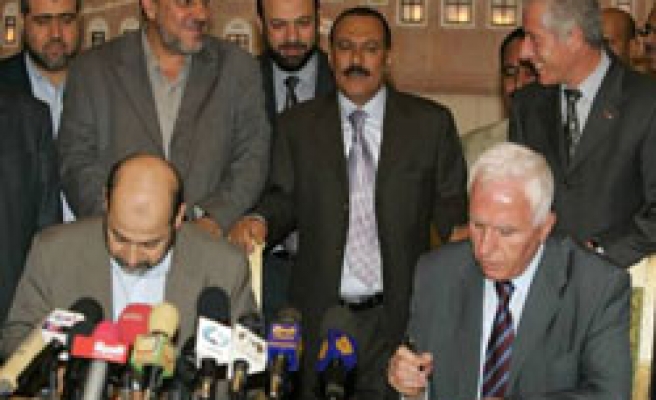 Hamas and Fatah will renew direct talks, in accordance with a Yemeni reconciliation initiative, on April 5, a senior Hamas official said on Sunday after both sides signed a deal in Sanaa to resume a dialogue.

The official said the first round of negotiations would be held in the Palestinian territories.

The two factions reconvened in Sanaa earlier in the day in a last ditch effort to hammer out a compromise over the future of the Gaza Strip and West Bank.

"We, the representatives of Fatah and Hamas, agree to the Yemeni initiative as a framework to resume dialogue between the two movements to return the Palestinian situation to what it was before the Gaza incidents," the Sanaa Declaration read.

The deal, which was signed by top Hamas negotiator Moussa Abu Marzouk and senior Fatah official Azzam al-Ahmed, also affirmed the "unity of the Palestinian people, territory and authority".

Saleh had pressed the two sides to agree to hold direct talks in early April on the plan that calls for the Gaza Strip to return to the way it was before Hamas seized the area in June after routing Fatah forces.

The issue of the future of Gaza has been a main point of contention, with Fatah demanding that Hamas Islamists give up control of the territory.

A Hamas official said on Saturday the group asked that the same should apply to the Israeli-occupied West Bank, where the Fatah-led Palestinian Authority has dismissed a Hamas-led government and arrested some Hamas supporters.

The Yemeni plan also envisages Palestinian elections, the creation of another unity government and the reform of Palestinian security forces along national rather than factional lines.

Fatah had said it would agree to direct reconciliation talks with Hamas only if the Islamist group first agreed to relinquish its hold on Gaza, home to 1.5 million Palestinians.

It was not immediately clear when talks would resume and at what level.