On Wednesday, Egyptian forces used water cannon and Hamas security forces had to restrain a crowd jostling for access during a brief opening of the Rafah crossing point between the Gaza Strip and Egypt. 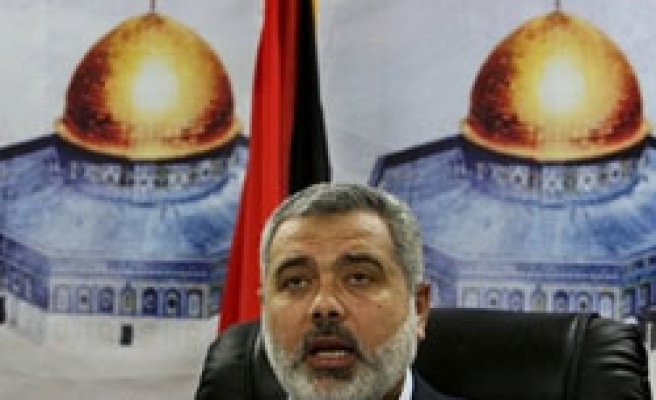 Senior Hamas leader Ismail Haniyeh sought on Thursday to calm tensions with neighbouring Egypt, a day after Egyptian police clashed with hundreds of Palestinians who tried to storm through a border crossing.

"Everything that had happened was spontaneous, not planned and was not meant to take place," said Haniyeh, who heads the Hamas government that controls the Gaza Strip.

On Wednesday, Egyptian forces used water cannon and Hamas security forces had to restrain a crowd jostling for access during a brief opening of the Rafah crossing point between the Gaza Strip and Egypt.

Some Palestinians threw stones at Egyptian forces and also complained of Hamas's failure to speed their passage to Egypt, the only access to the outside world for most Gazans, who are blocked from other land, sea and air routes by Israel.

Egyptian authorities suspended the operation after the clashes on Wednesday but reopened the crossing on Thursday to allow hundreds of Palestinians stranded in its territories back into the Gaza Strip.

Haniyeh said the clashes at Rafah were motivated by people angered by Israel's Gaza blockade.

He said Palestinians and Egypt shared many common interests, including the ceasefire Cairo brokered between Hamas and Israel and efforts to reconcile the Islamist group with Palestinian President Mahmoud Abbas's Fatah faction.

Hamas, which opposes Abbas's negotiations with Israel, seized the Gaza Strip from Fatah in fighting a year ago.

Under the ceasefire that began on June 19, Egypt was to invite Hamas and Israeli officials to Cairo within two weeks for indirect talks on a deal to exchange an Israeli soldier held in Gaza for hundreds of Palestinians jailed in Israel.

But Hamas officials voiced doubt such talks, which could also lead to Rafah's permanent reopening, would be held soon. They accused Israel of dragging its feet in implementing a truce deal that includes a gradual increase of goods shipments into the Gaza Strip.