Hamas leader Ismail Haniyeh brushed aside Israeli assassination threats on Friday in his first public appearance in over a month. 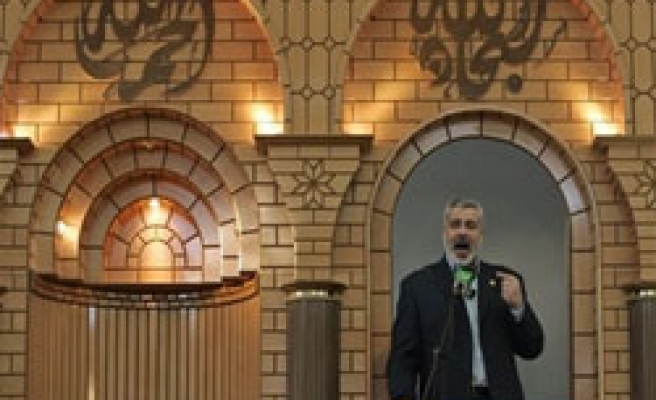 Hamas leader Ismail Haniyeh brushed aside Israeli assassination threats on Friday and said in his first public appearance in over a month that the Islamist group was ready for any Israel large-scale attack.

Tens of thousands of Gazans poured into the streets of the Hamas-controlled Gaza Strip after prayers in what leaders called a show of solidarity.

Israel has threatened to launch a large-scale military operation to Gaza.

Israel killed at least 33 Gazans, including five children, in the past two days alone.

"I tell the leaders of the (Israeli) occupation: This round will end in terrible failure just like all the other rounds failed," Haniyeh said at a mosque near his home in Gaza's Beach refugee camp.

Senior Hamas leader Fathi Hammad told a large rally in northern Gaza that the group's rocket were improving and would one day "reach everywhere" in Israel.

Senior members of Olmert's government have called for targeting Hamas political leaders and for bringing down Haniyeh's government.

Haniyeh said Israel was "deluded" if it thought it could now remove Hamas.

"What does a large scale raid mean? You (Israelis) were in the Gaza Strip and you quit because of the resistance. What does assassination mean? If some leaders are assassinated, would the cause be assassinated?" Haniyeh asked.

Israel withdrew troops and settlers from Gaza in 2005 but continues to control the air space, coastal waters and major border crossings.

Faced with a crippling Israeli-led blockade, Haniyeh appealed for patience and unity from Gaza's 1.5 million residents. "We are required to be united in facing the enemy."