An Israeli air raid on the house of Khalil al-Hayya, a Hamas leader, in the Gaza Strip has killed at least five people, according to a Hamas source and hospital officials. 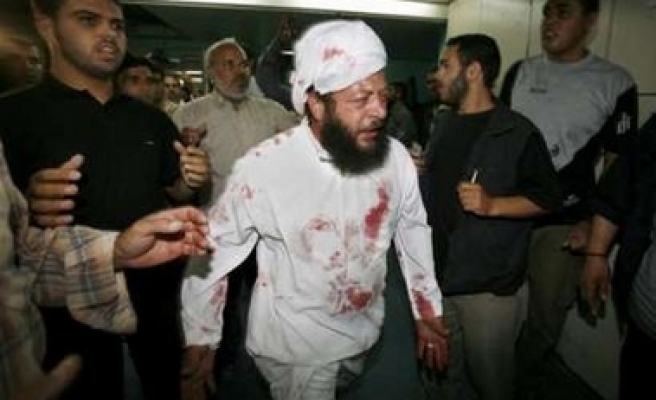 An Israeli air raid on the house of Khalil al-Hayya, a Hamas leader, in the Gaza Strip has killed at least five people, according to a Hamas source and hospital officials.

The attack on Sunday came hours after Israel vowed to intensify its military assault on the Gaza Strip in response to homemade rockets fired from Gaza into Israeli towns.

Ayman Mohyeldin, reporting for Al Jazeera from Gaza, said: "According to Palestinian medical sources there are at least three dead but that that number is expected to rise ... We know that Khalil al-Hayya was not in at the time of the attack, but there is no word as yet on who was in the house."

Earlier on Sunday Israel threatened stronger military action against Gaza, though the government did not appear to be considering a large-scale ground assault.

The Israeli government said in a statement that its "operations will focus on Hamas and the Islamic Jihad, who are responsible for the current escalation", but officials stopped short of approving a large-scale ground invasion.

Ehud Olmert, the Israeli prime minister, said on Sunday: "If the measured steps we are taking, in the political and military sphere, do not bring about the desired calm, we will be forced to intensify our response."

His comments came after fighters in Gaza fired at least 10 rockets at southern Israel, some of which landed in the town of Sderot causing damage but no casualties.

In Sderot, though, protesters called on the government to act to stop the attacks.

Meanwhile, Avigdor Lieberman, Israel's strategic affairs minister, threatened to pull his party out of the government unless Olmert ordered a large-scale operation against Hamas.

However, if Lieberman were to quit, Olmert would still have a small majority.

After sundown on Sunday, Israel fired a shell at northern Gaza, Palestinian security officials said. No casualties were reported.

Earlier, Israel killed three people, including at least one Hamas fighter, in an air strike on a car in Gaza City.

According to one witness, the vehicle burst into flames. The Israeli army attributed the fireball to weapons in the car.

In another air raid, Israel said it targeted an Islamic Jihad weapons workshop in northern Gaza, but the owner of the building said it was a stereo and video store that was hit.

Also on Sunday, Israel moved an undisclosed number of tanks, armoured vehicles and ground forces into areas just inside the Gaza border.

"We are assessing the situation every few hours and will definitely decide how to continue our activities," Amir Peretz, Israel's defence minister, said on Sunday, after a meeting of the Israeli security cabinet.

The air raids came as a ceasefire, established late on Saturday between Palestinian factions Hamas and Fatah, took effect after a week of fighting.

Hamas and Fatah fighter, who had controlled the streets and taken over apartment buildings in the previous week, dismantled roadblocks and scaled back their presence on the street.

Some in Gaza felt that the Israeli military action contributed to the establishment of the ceasefire.

"No one would condone fighting one another while the Israelis are shelling Gaza," said Fawzi Barhoum, a Hamas spokesman.

More than 50 Palestinians were killed in clashes that broke out after Mahmoud Abbas, the Palestinian president and leader of Fatah, stationed thousands of Fatah security force troops in Gaza City without consulting Hamas, Fatah's partner in the Palestinian unity government.