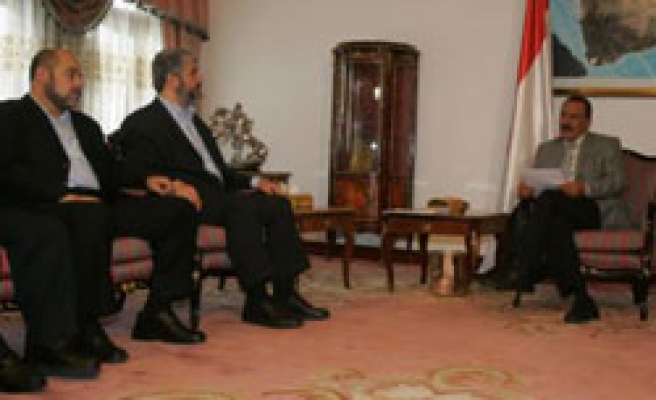 Hamas leader Khaled Meshaal called on Sunday for the resumption of Yemeni-brokered efforts to reconcile rival Palestinian factions and Yemen said a meeting could be held in the Gulf state of Qatar.

Several attempts by Arab leaders have failed to heal the rift between Abbas and Hamas.

Yemen tried to broker a deal in March. The "Sanaa Declaration", endorsed by both parties, called for a resumption of dialogue, but efforts appeared to collapse the same day over whether Hamas should cede control of Gaza before formal talks.

The Yemeni initiative also called for the creation of a fresh unity government and the reform of security forces.

After meeting Meshaal, Saleh said Qatar could host future talks to reconcile the Palestinians, as it did successfully with Lebanese politicians earlier this year, when a political crisis had brought rivals to the brink of a new civil war.

"God willing, we will be fortunate enough to have Qatar host a Palestinian-Palestinian meeting," he said.

Many Palestinians fear that a failure to end the factional division soon could make it more permanent.