Sacked Palestinian Prime Minister Ismail Haneya slammed an upcoming four-way summit to beheld in Egypt's Red Sea resort of Sharm el-Sheikh on Monday, saying it will bring nothing to the Palestinians. 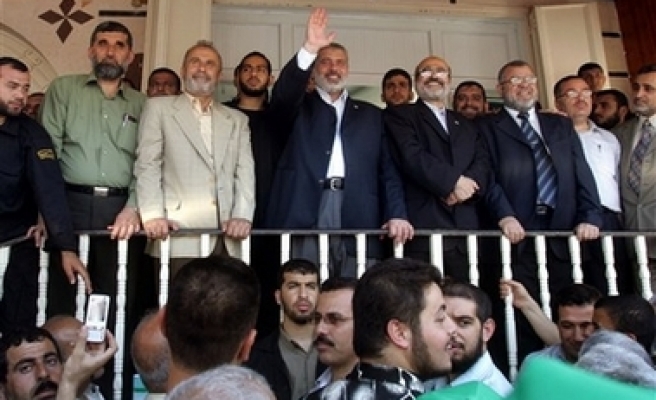 Sacked Palestinian Prime Minister Ismail Haneya Sunday slammed an upcoming four-way summit to beheld in Egypt's Red Sea resort of Sharm el-Sheikh on Monday, saying it will bring nothing to the Palestinians.

Speaking at a conference gathering tens of people in Gaza City, Haneya warned that "the Israelis and the Americans will not give us any thing and our country will return by resistance and endurance."

Haneya said that "the essence of the Palestinian problem is the (Israeli) occupation and the main controversy is with the occupation."

He also accused Israel of boosting the difference among the Palestinians by supporting an emergency government sworn in by President Mahmoud Abbas in the wake of Hamas' takeover of the Gaza Strip on June 14.


Egyptian Foreign Minister Ahmed Abul Gheit earlier said that the summit aims to boost Palestinian-Israeli relations and ease the constraints on the Palestinian people and create an appropriate climate for a resumption of the peace process. Analysts say the summit in Sharm el-Sheikh aims to bolster Abbas and encourage him to maintain the hardline stance towards Hamas.

As for Israeli decision to transfer the withheld tax revenues, Haneya underlined that the money should reach all the Palestinian people without distinctions.

Israeli cabinet on Sunday decided to officially recognize the newly appointed Palestinian Prime Minister Salam Fayyad and his emergency government, and approved the transfer of the withheld tax revenues to it.

Meanwhile, Haneya said Hamas was very flexible because "it accepted statehood inside the 1967 border and authorized the Palestine Liberation Organization (PLO) to negotiate with (Israel)."

But he underlined that his movement barely accepts statehood on the territories that were occupied in the 1967 war. He also denied accusations by Abbas that Hamas was digging a tunnel to assassinate him in Gaza, saying the tunnel was being dug in winter for operations against the Israeli army.

Turning to Alan Johnston, the BBC reporters kidnapped in Gaza on March 12, Haneya reiterated that Hamas and "the government" will not accept the continuation of holding Alan.

"He is held by a group of youths who exceeded the ideology of moderate Islam," Haneya criticized. Last Mod: 25 Haziran 2007, 16:05
Add Comment