Israeli forces killed at least four Palestinians yesterday and an Israeli minister warned that even Palestinian Prime Minister Ismail Haniyeh could be targeted by his country. 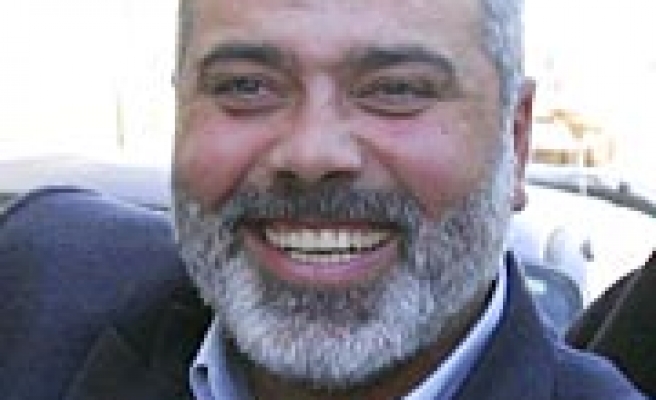 Israeli forces killed at least four Palestinians yesterday and an Israeli minister warned that even Palestinian Prime Minister Ismail Haniyeh could be targeted by his country.

Israeli Minister Ze'ev Boim said Israel must strike at Hamas leaders "with all our might."

"There's a list of them from the first of them to the very last," Boim told Israel Radio. "Now, with Hamas saying openly that it is the one who is firing the Qassam rockets, we must strike at Hamas. There are people there who are launching them, there are their commanders there in the armed wing, and there is the political echelon, there is a prime minister."

Yesterday, the Cabinet decided to step up strikes against Gaza fighters involved in rocket attacks against southern Israel.

A Cabinet statement said there would be a diplomatic effort launched aimed at resolving the tensions. The statement said Israel would "permit its defense establishment to intensify operational steps aimed at reducing rocket fire" and target those in Hamas and Islamic Jihad deemed responsible.

Four Palestinians were killed and several others were wounded in the continued Israeli airstrikes in the Gaza Strip. Medical sources said three Palestinians were killed early yesterday when an Israeli drone fired a missile at a vehicle in Al-Sahab Street in Gaza City. The dead were identified as Mohammed Al-Serhei 23, Emad Ashoor, 35, and Jamal Manaa, 52.

The sources said the corpses arrived in hospital completely burned. Al-Aqsa satellite TV, affiliated to Hamas, said that one of the three killed was a member of the Al-Qassam Brigades, the armed wing of Hamas. The two others were civilians.

The fourth victim was a Palestinian boy killed in a similar airstrike that targeted a group of people near Al-Faloja cemetery in the northern Gaza Strip. Witnesses and medical sources identified the victim, who was a passer-by when the attack took place, as Hateem Hamed, 16.

The sixth straight day of airstrikes came as an uneasy truce between warring Palestinian factions set in after a week of fierce fighting. Masked Hamas and Fatah gunmen who had controlled the streets and taken over apartment buildings in the previous week scaled back their presence sharply, and residents who had holed up at home seeking refuge from the gunbattles ventured out to stock up on supplies at busy shops.

Children went back to school in time for final exams, and adults returned to work.

Bilal Qershali, a 31-year old technician at the Communications Ministry, discovered that computers at the ministry had been stolen and damaged, and office furniture destroyed by gunmen who had taken over the building during the week of fighting. The damage was so severe that he and some 300 other employees left shortly after arriving, Qershali said. "Life is back to normal, but the effects will remain," he said.

"No one would condone fighting one another while the Israelis are shelling Gaza," he said.

More than 50 Palestinians were killed in clashes that broke out after Palestinian President Mahmoud Abbas of Fatah stationed thousands of loyalist security forces in Gaza City without consulting Hamas, Fatah�'s partner in the Palestinian governing alliance.

The infighting has threatened the survival of the fragile national unity government, formed in March to end an earlier round of factional bloodshed.

Israel added an overlapping layer of violence by sending warplanes after Hamas rocket squads whose attacks on Israeli border towns have sown panic and sent thousands fleeing to safer ground. Twenty-seven Palestinians have been killed in the airstrikes, which began Tuesday. Last Mod: 21 Mayıs 2007, 09:30
Add Comment