Heart of politics beats in rallies ahead of elections

Hundreds of thousands of demonstrators gathered in the Aegean province of İzmir in the latest anti-government rally ahead of the upcoming general elections, slated for July 22. 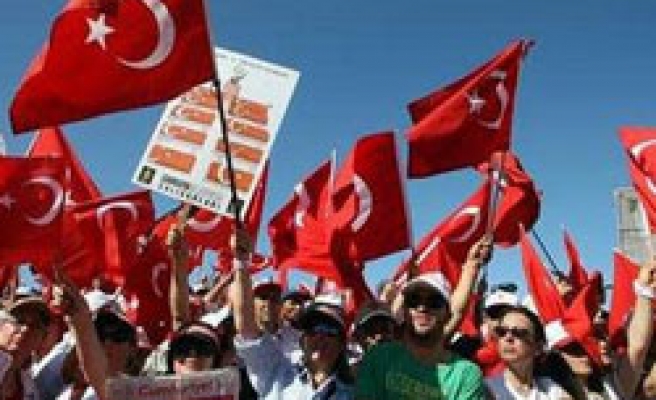 Hundreds of thousands of demonstrators gathered in the Aegean province of İzmir in the latest anti-government rally ahead of the upcoming general elections, slated for July 22.

The rally, attended by three leftist opposition leaders, came a day after up to 100,000 supporters of the ruling Justice and Development Party (AK Party) raised gigantic Turkish flags and chanted slogans denouncing the opposition as they enthusiastically listened to Prime Minister Recep Tayyip Erdoğan and Foreign Minister Abdullah Gül at a meeting in the eastern province of Erzurum.

Streets and buildings, including army barracks, in İzmir -- Turkey's third-largest city and known to be a bastion of the main opposition Republican People's Party (CHP) -- were awash with a sea of red Turkish flags and portraits of Mustafa Kemal Atatürk, the revered founder of modern Turkey. Demonstrators chanting slogans in favor of secularism had expected the rally to be a platform for unity between the politicians on the left, namely Deniz Baykal of the CHP and Zeki Sezer of the smaller Democratic Left Party (DSP), which has recently agreed to an election alliance with the CHP. But the two leaders did not meet or address the demonstrators, although they were believed to be among the crowd. A third leftist politician, Social Democratic People's Party (SHP) leader Murat Karayalçın, also attended the meeting.

The İzmir demonstration was the latest in a series of "republican rallies" that began in Ankara on April 14 and later continued in İstanbul, Manisa and Çanakkale, aimed at supporting secularism and opposing a candidate from the ruling AK Party becoming the next president of Turkey. The rallies have received praise as a demonstration of the people striving to make their voices heard.But the meetings, which intensified after the military issued a strong statement on April 27 expressing concern over the presidential election process and warning of intervention, also raised questions over the demonstrators' desire to see the military, the die-hard guardian of Turkey's secular order, intervening in the country's politics.

The AK Party, which has overseen the start of accession talks with the European Union and pushed for radical economic and political reforms aimed at bringing Turkey closer to the bloc, denies it is pursuing an Islamist agenda. “Would we have worked that hard to join the EU if we had a hidden agenda?” Foreign Minister Gül, the AK Party’s presidential candidate who had to withdraw his bid after the Constitutional Court annulled the parliamentary vote, has recently asked.

Demonstrators in İzmir, gathering in Gündoğdu Square and along the coastal strip of Kordonboyu, chanted anti-EU and US slogans as well as ones against the AK Party government. “Neither the US nor the EU, fully independent Turkey,” “Voting for Tayyip kills,” “Killer US, get out of the Middle East” and “International Monetary Fund out, this is our country,” were among the slogans frequently chanted by protestors. The banners raised by demonstrators called for unity among the leftist parties in order to counter the AK Party in the general elections. One banner read “We are all Turks,” apparently in reaction to banners reading “We are all Armenians” raised at a funeral ceremony in January for Turkish-Armenian journalist Hrant Dink, slain by a teenage hit man in İstanbul.

An opinion poll recently published by Vatan daily said some 62 percent of those who attended the pro-secularist rallies voted for the CHP in the previous elections, held in 2002.

Retired Gen. Hurşit Tolon, a prominent member of one of the main organizers of the meeting, the Kemalist Thought Association (ADD) and Workers’ Party (İP) Chairman Doğu Perinçek were also in attendance at the rally. Many demonstrators came from İstanbul, Ankara and other cities.

The rally took place a day after a bomb fastened to a bicycle exploded at an open-air market in İzmir as traders were preparing their stalls for the day, killing one vendor and injuring 14 other people.

The government is now pushing for constitutional changes to pave the way for election of the president by public vote after its attempt to get Gül elected in Parliament was blocked by the Constitutional Court and the CHP. The latter successfully challenged the election at the court, based on the claim that there were less than 367 deputies in attendance when the vote began. CHP leader Baykal said he opposed the public election of president, saying it would result in “sultanate” coming back to Turkey and warning that it would lead the public will to “shatter.”

Erdoğan lashed out at Baykal during his visit to Erzurum, which was organized to hand over houses built by the Public Housing Authority of Turkey (TOKİ) to their owners. “We have never lost our common sense in the face of those who try to stir up tension [or] create polarization. You know who I am talking about,” Erdoğan told supporters in Erzurum, where a two-kilometer-long Turkish flag streamer was raised aloft.

“You will teach them the lesson when the time comes,” Erdoğan said, referring to the coming elections. He said that Parliament had elected the president in the past, but when it came to Gül, his candidacy was blocked. “My nation would send me to Parliament even with 550 deputies (the entire Parliament), but you (the opposition) would still make up excuses to block it,” he said, adding: “Here are those who believe in democracy and the secular republic. But the opposition is afraid to go to the people.”

Banners at the Erzurum gathering read, “Neither in Tandoğan, nor in Çağlayan, the republic is in Erzurum,” referring to past rallies in Ankara’s Tandoğan and İstanbul’s Çağlayan squares.