The Philippine air force grounded its Vietnam War-era Huey helicopters Sunday after one crashed on a busy street while landing in a central city after combat training, killing nine people, officials said. 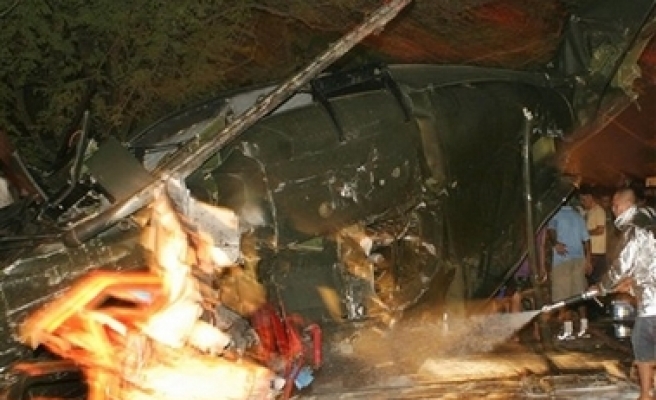 The Philippine air force grounded its Vietnam War-era Huey helicopters Sunday after one crashed on a busy street while landing in a central city after combat training, killing nine people, officials said.

The UH-1H plummeted out of control while landing and crashed on a street outside an air base in Lapu-Lapu city on the central island of Mactan Saturday afternoon, pinning a motorcycle taxi and hitting another near a public market, air force officials said.

All seven people riding the motorcycle taxi were killed while a driver and a commuter were wounded in the other. The crash also killed one of two veteran pilots and one of two crewmen of the helicopter, the officials said.

Most of those who died on the ground were commuters on their way home. The air force said it would shoulder the cost of their burial and extend other help to their families.

TV footage showed the wreckage of the helicopter lying in the middle of a street as ambulance vans arrived. Nearby, a man covered a pile of bodies with newspapers near a flattened motorcycle as throngs of residents watched.

Brig. Gen. Arthur Mancenido, commander of the 205th Helicopter Wing in Mactan, said 41 Hueys nationwide — the air force's work horses — were indefinitely grounded pending an investigation to determine the cause of the crash.

Officials refused to speculate on the cause of the crash but an air force officer said the pilots suddenly encountered engine trouble at an altitude of about 400 feet.

Investigators were trying to determine if the accident was caused by flying kites after they found nylon cords used in kite-flying coiled in the mast assembly, the part that connects the main rotor to the helicopter's body, he said.

As the helicopter went out of control, the pilots tried but failed to maneuver it away from houses toward a basketball court area, according to the air force officer, who spoke on condition of anonymity because he was not authorized to talk to the media.