The release of the Lebanese prisoners, said by Hezbollah to be the last held in Israel, closed a file that has motivated repeated attempts by Shi'ite fighters over the past quarter of a century to capture Israeli soldiers to use as bargaining counters. 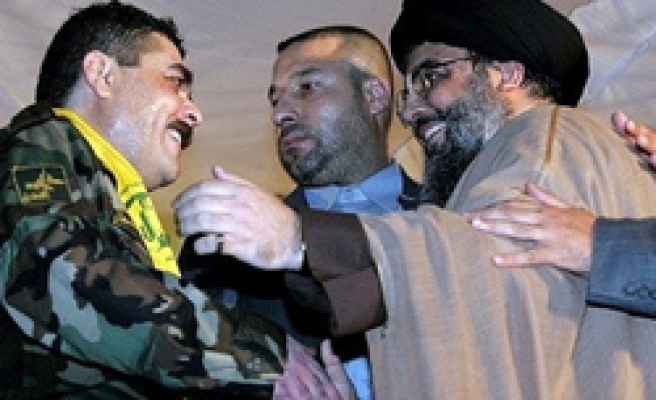 Nasrallah, whose movements are kept secret for security reasons, embraced the ex-prisoners at a rally in Beirut.

"This people, this nation and this country, which gave a clear image today, cannot be defeated," he told the crowd before leaving to deliver a speech by video link from a secure location.

The International Committee of the Red Cross brought the men to the border town of Naqoura. Wearing military fatigues, they marched down a red carpet flanked by a Hezbollah honour guard.

"Your return is a new victory," Suleiman declared.

As fireworks lit the night sky, tens of thousands of people waving yellow Hezbollah flags gathered in Beirut for the rally to celebrate the release of Qantar and four Hezbollah fighters.

Crowds threw rice and mobbed the cars carrying the men to the rally in the southern suburbs, a stronghold of Hezbollah.

The ex-captives waved Hezbollah and Lebanese flags at the crowds before Nasrallah's brief appearance sent them wild.

The release of the Lebanese prisoners, said by Hezbollah to be the last held in Israel, closed a file that has motivated repeated attempts by Shi'ite fighters over the past quarter of a century to capture Israeli soldiers to use as bargaining counters.

Under the deal arranged by a U.N.-appointed German mediator, Israel also returned the bodies of eight Hezbollah fighters slain in the 2006 war and those of four Palestinians, including Dalal Mughrabi, a woman fighter who led a 1978 raid on Israel.

The four were among nearly 200 Arabs killed in Israel, whose bodies were delivered to Lebanon in ICRC trucks as part of the delicately orchestrated swap. Hezbollah returned the remains of other Israeli troops killed in the south.

Israel will also free scores of Palestinian prisoners at a later date as a gesture to U.N. Secretary-General Ban Ki-moon.

Hezbollah has dubbed the exchange "Operation Radwan", in honour of "Hajj Radwan", or Imad Moughniyah, the group's military commander assassinated in Syria in February.

Yellow Hezbollah flags fluttered across south Lebanon and on the coastal highway from Naqoura to Beirut. "Liberation of the captives: a new dawn for Lebanon and Palestine," a banner read.

For some Lebanese, the swap showed the futility of the conflict with Israel two summers ago. "There shouldn't have been a war in 2006. A lot of lives were lost," said Rami Nasereddine, 18, lamenting Israel's refusal to trade captives at the time.

The Palestinian Islamist group Hamas said the Hezbollah deal strengthened its own hand in demanding freedom for hundreds of prisoners in exchange for captured Israeli soldier Gilad Shalit.