Hezbollah has dubbed the exchange "Operation Radwan", in honour of Imad Moughniyah, the group's military commander who was assassinated in Syria in February. 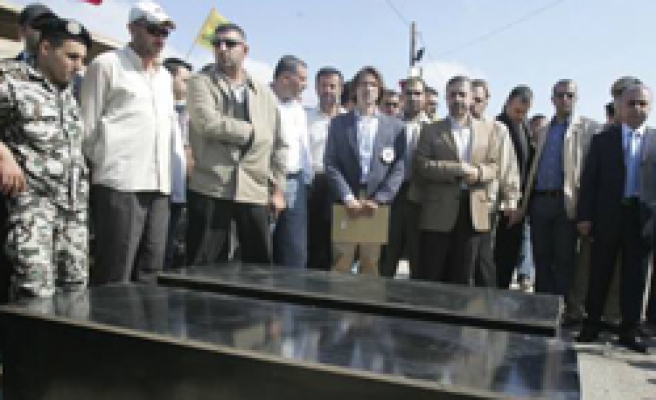 Hezbollah handed the bodies of two Israeli soldiers to the Red Cross on Wednesday to be exchanged for Lebanese prisoners held by Israel in a deal viewed as a triumph by the Lebanese group.

Two black coffins were unloaded from a Hezbollah vehicle at a U.N. peacekeeping base on the Israel-Lebanon border after a Hezbollah official, Wafik Safa, disclosed for the first time that Israel soldiers Ehud Goldwasser and Eldad Regev were dead.

The International Committee of the Red Cross (ICRC) took the coffins and drove them into Israel. Safa later said DNA tests conducted by the ICRC had verified the identity of the soldiers.

"We are now handing over the two imprisoned Israeli soldiers, who were captured by the Islamic resistance on July 12, 2006, to the ICRC," Safa said at the border. "The Israeli side will now hand over the great Arab mujahid (holy warrior) ... Samir Qantar and his companions to the ICRC."

In a deal mediated by a U.N.-appointed German intelligence officer, Israel was to free Qantar and four other prisoners.

Qantar had been serving a life prison.

Hezbollah's Safa said Israel had later handed over via the ICRC the bodies of eight Hezbollah fighters slain in the 2006 war, and those of four Palestinians, including Dalal Mughrabi, a woman fighter who led a 1978 raid on Israel.

The four were among the nearly 200 Arabs killed in Israel whose bodies are to be transferred to Lebanon as part of the exchange. Hezbollah will return the remains of Israeli soldiers killed in south Lebanon.

The deal also calls for Israel to release scores of Palestinian prisoners at a later date as a gesture to United Nations Secretary-General Ban Ki-moon.

Hezbollah has dubbed the exchange "Operation Radwan," in honor of "Hajj Radwan," or Imad Moughniyah, the group's military commander who was assassinated in Syria in February.

Yellow Hezbollah flags and banners fluttered across south Lebanon and along the coastal highway from the border village of Naqoura to the capital, Beirut. "Liberation of the captives: a new dawn for Lebanon and Palestine," one banner read.

For some Lebanese, the exchange demonstrated the futility of the devastating conflict with Israel two summers ago.

"There shouldn't have been a war in 2006. A lot of lives were lost," said Rami Nasereddine, an 18-year-old student in downtown Beirut. "It's good that the prisoner exchange is taking place. Israel should have done that two years ago."

The Palestinian Islamist group Hamas said the prisoner swap strengthened its own position in demanding the release of hundreds of long-serving prisoners in exchange for Gilad Shalit, an Israeli soldier captured two years ago near the Gaza Strip.

"This is a great victory to the resistance and to Hezbollah and it is a festival for the Lebanese prisoners and their families," Hamas official Sami Abu Zuhri said in Gaza.

Olmert had described Qantar as the last bargaining chip for word on Israeli airman Ron Arad, missing since he bailed out over Lebanon in 1986. Israel said a report supplied by Hezbollah on Arad as part of the swap had failed to clarify his fate.

The other Lebanese prisoners being freed along with Qantar, a Druze, were named as Maher Qorani, Mohammad Srour, Hussein Suleiman and Khodr Zeidan. They were to be welcomed with rallies and fireworks in Lebanon, which declared a public holiday.

The Israeli army identified bodies handed over by Hezbollah on Wednesday as the two soldiers captured by the Lebanese group two years ago, Israel Radio said.

The report said Israeli generals were on the way to notify the families of Ehud Goldwasser and Eldad Regev. An Israeli military spokesman said earlier there would be no official announcement on the matter until the families were informed.