French suburbanites flocked to polling stations on Sunday, April 22, to cast their ballots in one of the most unpredictable presidential elections in decades, pinning high hopes on the country's new political leadership. 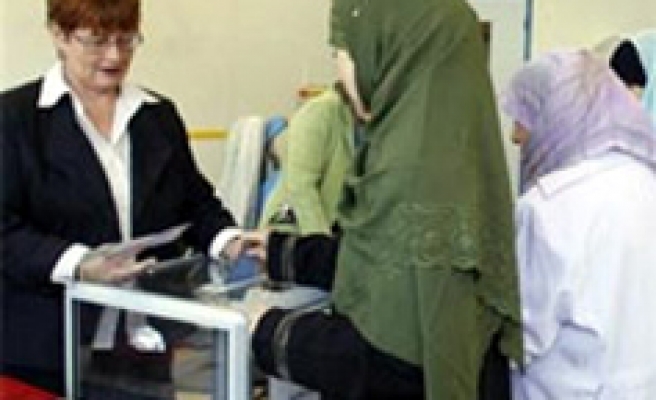 "There is a big turnout in the suburbs, especially from youths who are racing to cast their ballots," Trenisien Lacourbe, an official at a polling station in the Parisian rundown suburb of Argenteuil, told IslamOnline.net.

Three hours before polling closed, three-quarters of French voters had cast first-round ballots in presidential race, a giant leap in turnout compared to the 2002 vote.

Turnout appeared on course to set a record, according to polling firms IPSOS and IFOP, which predicted it would reach 87 percent when the polls close at 8:00 pm (1800 GMT).

Around 44.5 million registered voters — an increase of 3.4 million on 2002 — were choosing a successor to President Jacques Chirac, 74, who steps down next month after leading the country for 12 years.

Up to 1,800 suburbanites have newly registered to vote in the elections, setting a record unprecedented since the 1981 polls.

Opinion polls have consistently given a clear first round lead to Nicolas Sarkozy, the 52-year-old leader of the ruling Union for a Popular Movement (UMP).

The main three candidates come from a new generation of leaders, and all claim to represent a break from a discredited past.

All also say the country needs radical solutions to save it from a huge public debt, rampant unemployment and seething discontent in the high-immigration suburbs.

Only the two front-runners qualify for the second round — the system having been devised so that presidents are always elected with more than half the vote.


Bayrou casts his ballot in Paris. (Reuters)
Most of the suburbanites were united on voting down Sarkozy in favor of any other candidate.

"I voted in the first round for (anti-globalization) campaigner Jose Bove," 27-year-old Omima told IOL in Argenteuil.

"And in the second round, I will back either Royal or Bayrou in an expected face-off with Sarkozy."

The outgoing interior minister had triggered a political storm during a visit to Argenteuil in 2005 when he called young French of immigrant background "racaille," or rabble.

"But I will back Royal if she made it to the second round with Sarkozy," told IOL.

Wayba Kheshiba, 37, who was born in France to Algerian parents, sees Sarkozy as a "change for the worst."

He expects a flare-up of riots if the rightwinger wins the two-round election.

"France has changed. It is made up of different people and it should build itself up from all of these differences," Kheshiba, who voted for Royal, told Agence France-Presse (AFP).

In Clichy-sous-Bois, the poor Paris suburb where the riots began in 2005, Ziad and his younger brother Shahazad said they had not voted in 2002 but this time they had picked Bayrou.

"Segolene, I just don't see her as president, Sarkozy, he's scary, so Bayrou was left," said Ziad, who declined to give his surname, as he left a polling station.

Samir, a 40-year-old worker of Turkish origin, voted for Royal, saying that as interior minister Sarkozy had introduced tougher policing methods that had left the suburbs feeling like they were under siege.

"Madame Royal will bring in more work, more liberty. Under Sarkozy, people were pushed and pushed, they had no freedom," said Samir, who did not want to give his surname.

Omar Idbelbema voted for Bayrou, saying the "third man" in the Elysee race would address the problems of housing, unemployment and immigration.