At least 13 protesters were killed by police on Tuesday in the Muslim Kashmir Valley in some of the worst clashes since a separatist insurgency against Indian rule broke out in 1989. 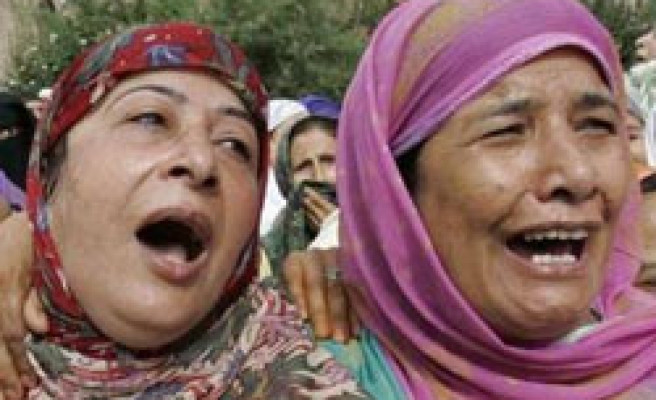 When a mob shouting praises for a Hindu god torched this Muslim hamlet, any hopes of religious peace in Kashmir state may have been destroyed along with these charred homes and scarred drums of ruined wheat.

"We never had a problem like this before," said Bashir Ahmed, a farmer from the Muslim Gujjar community. In oppressive humidity of a dark cattle shed with scorched brick walls, he revealed crescent-shaped scars on his back from the mob's beating.

"I had heard from parents about '47," he said, referring to Partition in 1947 when India and Pakistan were formed and hundreds of thousands were killed in religious clashes.

"But this is the first time I have seen anything like this."

The burning of several hamlets in early August was one of at least 72 attacks on Muslim homes in Jammu and Kashmir state over the last three weeks as a land row over a Hindu shrine escalated, state officials said.

At least 13 protesters were killed by police on Tuesday in the Muslim Kashmir Valley in some of the worst clashes since a separatist insurgency against Indian rule broke out in 1989.

But demands from Hindus for land in Muslim Kashmir have also opened a new front in Hindu-majority Jammu, threatening to worsen communal ties in parts of the state largely untouched by insurgency, with fears it could spread to other parts of India.

Most protests in Jammu have been peaceful and organizers say they are not motivated by religion. But residents are worried.

At least two people were killed and dozens injured on Tuesday during Indian attack over Muslim protestors in Jammu.

Standing only a few hundred metres from the Pakistani border, Gujjars in Garkhal told how Hindus shouted "Burn them all!" and chanted slogans for the Hindu god Lord Shiva. Due to the intervention of security forces, no one was killed.

The attacks by several thousand Hindu villagers were sparked, villagers say, by rumours a Muslim boy had attacked a Hindu girl.

But this kind of religious conflict has been extremely rare for decades in Jammu, and few have doubts to why it happened now.

"This is all hundred percent linked to the shrine issue," said Hamid Choudhary, leader of Muslim Front Jammu, a group formed by Muslim leaders to sooth religious tensions.

THE WORST SINCE PARTITION?

Jammu residents have led a three week strike which has closed businesses and has disrupted supplies to the Kashmir Valley, in turn leading to violent protests from Kashmiri Muslims.

"I've been here more than 60 years," said Zahur-ud-din, a former administrative head at Jammu University and a front leader."This is the most tense communal situation I have seen."

Police say Muslims have responsed with attack Hindu pilgrims and truck drivers. But they have been rarer in a region where Muslims are in a minority.

But many Gujjars say they are still threatened from Hindu villagers. Many now keep watch at night and sleep during the day.

"Even with Hindus we have good relations with, we now suspect them," said Haji Ghulam Hassain, who lost his home in an attack.