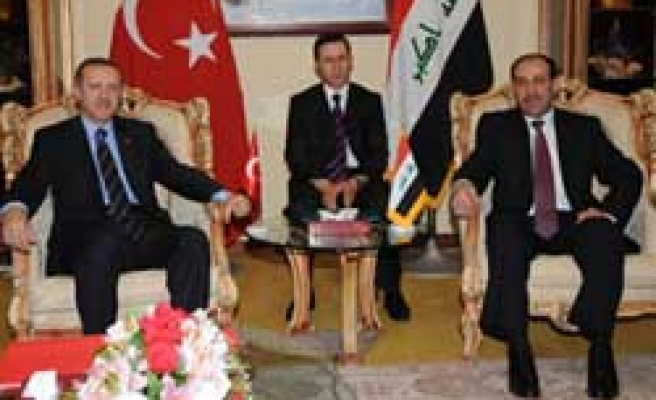 Turkey's Prime Minister Recep Tayyip Erdogan said Thursday his visit to Iraq carried historical importance for not only bilateral relations but also the region itself.
Erdogan and his Iraqi counterpart Nuri al-Maliki held a press conference following their tete-a-tete meeting in Baghdad on Thursday.

"I am pleased about the hospitality displayed towards me in Baghdad. As the first Turkish prime minister visiting Iraq after 18 years, I am pleased to be here with my brothers and sisters," Erdogan said.

"I am confident that from now on we will not wait for another 18 years before a Turkish prime minister visits Iraq. The agreement we have signed on Thursday for the establishment of a high strategic cooperation council is a symbol of our determination to promote relations," Erdogan said.

Iraqi Prime Minister Nuri al-Maliki said that "both Turkey and Iraq are ready for a new term of cooperation. The two countries are making progress in the fight against terrorism."

The agreement will facilitate training for Iraqi officers and teachers.

Erdogan was given a red-carpet welcome at Baghdad's airport, before heading to the heavily protected Green Zone government compound for talks with Iraqi Prime Minister Nuri al-Maliki.

PKK militant group will be high on the agenda of Erdogan's talks. An Iraqi official said discussions would also focus on energy cooperation, investment, water supplies and the reconstruction of Iraq.

Turkey's military launched a big ground offensive against the PKK inside northern Iraq in February.

Ankara for its part has been highly critical of Baghdad's failure to deal with the several thousands militants holed up in the north.

Iraqi officials say the government has taken some measures, while noting it has major security challenges elsewhere.

Iraqi President Jalal Talabani, a Kurd, led a delegation of to Turkey in March, in a visit Erdogan said at the time would hopefully begin a "new page in Turkish-Iraqi relations".

Ankara blames the PKK for 40,000 deaths since 1984 when the group took up arms. Like the United States and the European Union, Turkey considers the group a terrorist organisation.

Last September, Turkish and Iraqi officials signed an anti-terrorism deal in Ankara to tackle the PKK, although the two sides failed to agree on any border security cooperation.

Turkey is one of Iraq's most important trading partners and Iraqi officials have called on Turkish firms to invest in Iraq.

Exports of oil from Iraq's northern Kirkuk fields flow through a pipeline to the Turkish port of Ceyhan on the Mediterranean. There are also plans for a natural gas link.

During Talabani's visit to Ankara, Turkey's trade minister said bilateral trade between the two countries was targeted to reach $20 billion within two years, compared with more than $3.5 billion in 2007 and $940 million in 2003.

A blossoming of trade with the region could help revive Turkey's southeastern economy and alleviate the poverty that has fed rebellion there for over 20 years.